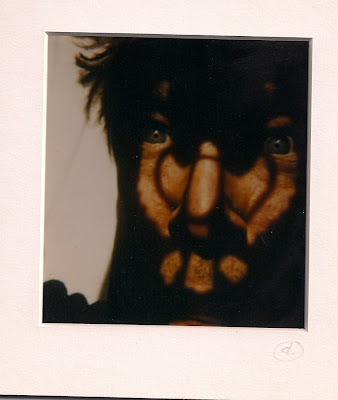 photograph by David Lundahl
I recently had an opportunity to re-visit David Lundahl, the photographer, sculptor and musician from southern Wisconsin who (over 15 years) has taken 115,000 Polaroid self-portraits. When we originally discussed his work a few months ago, I spoke of the process itself: how the layers of stencils, gelled prints, and natural media (scarves, bark, shark jaws, among others) combine with a complex series of mirrors to harness natural light to create a startling level of three-dimensionality to his photographs. I also spoke of his life itself in some detail, which I'll reprint below:

The story of David Lundahl's art and life can't really be put into one paragraph, but, as an introduction, here it goes. Mr. Lundahl's art, and his choice to live in rural Wisconsin, all speak to his lived experiences. He contracted polio as a boy in the 1950's and has worn a leg brace ever since; his family were prominent executives in John Deere; he came of age in the heady years of the late 1960's and decided to set out on his own path...
But part of the story here is New Light Studios, the dilapidated farm that Mr. Lundahl rebuilt, largely by himself. Despite his restricted mobility, he reroofed and refloored the barn and completely rehabilitated the house and other buildings. Thus, an abandoned dairy farm became a place for people to come and visit and make art: the silo contains musical instruments, the barn is floored to accomidate dance performances, one room in the house is covered in three layers of white shellac to make it an overwhelming space for music-making, a modified shed is a welding studio and the corn silo is affixed with a level of decks leading all the way to the top--so that one can watch the sunset or just read a book 100 feet in the air.

Here is a slideshow I created that traces the arc of these photographs, from the early representational stencil works to the intensely abstract self-portraits of the later years. They appear larger and in greater detail by following the link to the web album:

David Lundahl's art, and the story of how he overcame physical adversity to create a place equal to his art, ranks among the most inspired and visionary collections of work I've ever encountered. However, the more recent chapters of this story have thrown his accomplishment into a light that may be all-too-familiar to our readers and to those attempting to make art outside of our country's urban centers.
Put simply, the very place that gives Mr. Lundahl the space and freedom to create his art--by virtue of its remove from urban and suburban centers--actively works against his desire to share it with people beyond his handful of local friends. While these audiences may feel more comfortable with someone from rural Wisconsin engaging in the folk arts, or portraying subject matter they deem sufficiently "rural," an artist like David Lundahl (and his social non-conformity) throws all of those assumptions to the side. One visitor from New York City, after sitting around the artist's kitchen table and viewing some of his photographs, perhaps articulated this predicament best; "you can't make that here," he yelled, shaking Mr. Lundahl by the shoulders, imploring him to leave Wisconsin for New York.
Yet David Lundahl is staying put at New Light Studios, albeit uneasily. Though he despises the line of thinking that suggests that modern art can only be made in cities, and only with by entering "the art world," he simultaneously feels a desperate need to connect with anyone, artists or otherwise. When he talks through this bind to me, it's clear that his work has left him at the crossroads, to decide between valuing the place he calls home or leaving it for the sake of an artform that only exists because of its rural genesis.
I'm wondering if other readers have encountered similar issues--either themselves, or in the story of other rural artists. Here's a few questions we're considering here at The Art of the Rural, inspired by Mr. Lundahl's position: are modern rural artists who don't work in a folkloric vein solely considered "outsider artists?" Is there a rural-urban dynamic beneath that term (even though there are many urban outsider and self-taught artists)? Wendell Berry has written of "the prejudice against country people;" is there a similar prejudice against (or misunderstanding of) rural artists, or has the internet eroded those limiting assumptions?
If you have any ideas, or suggestions for artists that address these questions, please feel free to contact us or discuss the matter on our Facebook page--we're hoping to discover more artists such as Mr. Lundahl.
Posted by Matthew