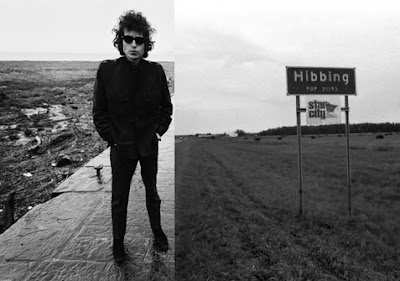 City’s just a jungle; more games to play
Trapped in the heart of it, tryin' to get away
I was raised in the country, I been workin’ in the town
I been in trouble ever since I set my suitcase down
--from "Mississippi"
Last week Aaron, a reader from Ohio, passed along some very interesting news. It appears that Duluth, Minnesota, Bob Dylan's birthplace, is actively working to bring back their estranged native son for a concert on his 70th birthday. The news of these plans has been documented in forums on the encyclopedic Dylan resource Expecting Rain, and was confirmed last month in the Duluth News Tribune, where John Ziegler reported that city officials are currently in talks with Dylan and his management to bring him back to Minnesota on or around his May 24th birthday.
As with all things Bob Dylan, this story contains a good deal of rumor and apocrypha. For instance, I heard that the small mining town of Hibbing, Minnesota, Dylan's hometown, had originally sought to welcome the musician back on his 70th birthday (Aaron tells me that Dylan last visited for his ten-year high school reunion, where he was roundly ignored by his former classmates), yet Mr. Ziegler reports that Duluth had extended their invitation a full year ahead of schedule, contacting him on his 69th birthday. Regardless, if Dylan accepts this invitation we will see a great deal of media attention focused on his rural Minnesota roots. While there may be a nostalgic whiff to such reflections, it is significant to think of Dylan-the-70-year-old back in Minnesota, over four decades after he recorded his generation-defining howl of "no direction home".
If we put that song--and the long-view of Dylan's legacy--in perspective, then what could also come out of such a birthday in Minnesota could be a reappraisal of a whole generation's relationship to rural place. While Dylan did his best to shirk his "voice of a generation" status, it's clear that his life narrative, captured so eloquently in "Mississippi," is representative of many of his fellow baby boomers: that first wave of the "rural-brain drain," many of whom would later take part in the flight out of America's urban centers and into a suburban life where rolling stones meet their cul-de-sac.
However, Dylan's last handful of records have embraced the traditional forms of blues and country music just as baby boomers are returning to facets of their own rural upbringing. While the local and organic food phenomenon is part and parcel of this generational trend, many are realizing (as Wendell Berry did so many years ago, in his essay "A Native Hill")  that you can go home again. In my own home region this has been occurring for a few years, as baby-boomers begin to form organizations to preserve our small Ohio Valley town--and to hopefully bring it back to some semblance of its former self.
Beyond this, the issue becomes one of what "homecoming" means, and how the rural diaspora negotiates this return. As this teenager's video from Hibbing suggests, life never stopped in these communities, and those who stayed both welcome and resent the influence of those who left.
We'll be following the events surrounding this birthday concert; until then, here's a short video produced by the University of Minnesota in conjunction with the UM Press's release of Highway 61 Revisited: Bob Dylan's Road from Minnesota to the World, edited by Colleen J. Sheehy and Thomas Swiss:
Posted by Matthew