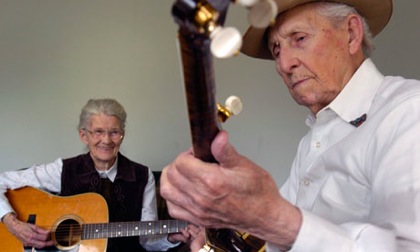 Wade Mainer with his wife Julia in 2006


As folks may have heard, Wade Mainer, "the grandfather of bluegrass," passed away on Monday at the age of 104. Below I'd like to offer a few links and videos that help bring into perspective this musician's life and accomplishments. Here's William Grimes of The New York Times:

Mr. Mainer began recording in the early 1930s with J. E. Mainer and the Mountaineers, led by his older brother, a fiddle player. He introduced a distinctive two-finger style, with the thumb moving downward and the forefinger moving upward, that contrasted with the traditional downward-moving clawhammer stroke. This style gave a modern flavor to traditional tunes and inspired younger players like Don Reno and Earl Scruggs.

In the late 1930s Mr. Mainer formed his own group, the Sons of the Mountaineers, which recorded dozens of songs on RCA Victor’s Bluebird label.

“Wade brought the music forward,” said Dick Spottswood, the author of “Banjo on the Mountain: Wade Mainer’s First Hundred Years” (2010). “In the 1920s, the banjo stayed in the background, providing counterpoint and rhythm. He made it prominent, and laid the groundwork for bluegrass in the 1940s.”

This week Nathan Salsburg's Root Hog Or Die vernacular radio program broadcast a wonderful program of Mr. Mainer's pre-war music which can be heard by following this link:

To hear Mr. Mainer in his own words, here's the first of a three-part interview with David Holt of the North Carolina Folkways public radio program:


Frank Stasio's State of Things program on North Carolina Public Radio featured this conversation on the work on Wade Mainer in April. He speaks to musicologist Dick Spottswood, author of Banjo on the Mountain: Wade Mainer's First Hundred Years, Sarah Bryan of the North Carolina Folk Institute, and David Holt.
Posted by Matthew