Course on Midwest Culture: A Bibliography 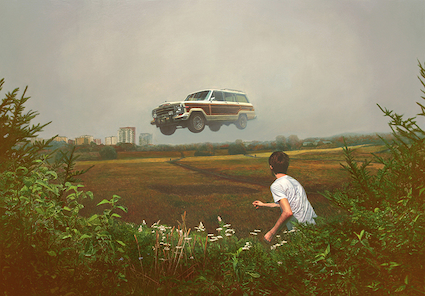 Airborne, 2010; Alex Roulette as seen in fly over art

A quality course begins with quality secondary sources. Such quotidian details may seem annoying for those chomping at the bit to get on to the primary stuffs of Garland, Anderson, et al, but, quite simply, it needs to be done.

Humanities-folks aren’t always much for the quantitative, but some data can help. A quick Googling of “Southern literature” reveals a Norton Anthology and 293,000 hits. The same for “Midwest literature” offers up no Norton and 72,400 hits. A region with roughly twice the population of the Midwest (according to the most recent census, including Texas) has four times as much online material. If Google accurately mirrors the grander world, then, per capita, the south gets twice as much literary attention as the Midwest.

But we’re not starting from scratch. Fine scholars have established a modest but quality base of secondary material on Midwest literature (with far more on our region’s fine history, specifically--not included here) and, while I’m still spoiled by my university’s excellent library system, I intend to get most such books atop my desk and write all too brief reviews for your reading pleasure.

• Sisson, Zacher, Cayton, ed. The American Midwest: An Interpretive Encyclopedia (Indiana UP, 2007). The most valuable member of the pack is an eight pound beast with equally heavy endorsements from Kurt Vonnegut and Toni Morrison. Its impressive advisory board and editorial staff divide the book between “Landscapes and People” (including charming individual “portraits” of the twelve states), “Society and Culture,” “Community and Social Life,” “Economy and Technology,” and “Public Life.” Most of our time will be spent in the section on culture, of course, with a strong bent towards the encyclopedia’s invaluable section on literature. The book is both meaty and handsome, a scholar and a gentleman, and would make a fine addition to any sturdy bookshelf (and available for around $35 from the consistently impressive Abebooks.com). What the Oxford English Dictionary is for English nerds, The American Midwest is for Midwestern nerds: you page through it intending a brief sojourn and raise your eyes to discover an hour has gone by.

• Barillas, William. The Midwestern Pastoral: Place and Landscape in Literature of the American Heartland. (Ohio UP, 2006). William Barillas’ book examines five midwestern authors from a wide spread of time and genres: Willa Cather, Aldo Leopold, Theodore Roethke, James Wright, and Jim Harrison. Barillas’ introduction and first chapter may be a good place to start for the fledgling Midwestern scholar simply because it is one of the newest pieces of scholarly work. Therein, Barillas poses important questions that build upon previous scholarship: the Midwest’s relationship to America at large as a sort-of synecdochal representative; the problems with regionalisms; and, of course, the centrality of the pastoral myth in the Midwest. Barillas also writes wonderfully. He introduces us to both utilitarian individualist types like “the tinkerer” and “the booster” as well as the romantic individualists who were born and bred on the East Coast but largely shaped by the Westward movement into what would become the Heartland: Emerson, Whitman, Bryant, et al.

• Holden, Greg. The Booklovers Guide to the Midwest: A Literary Tour. (Clerisy Press, 2010). If we’re undertaking the regionalist project of studies-attached-to-place, what better guidebook than one that literally takes you up and down major Midwestern highways for a literary road trip? Just plain fun.

• Weber, Ronald. The Midwestern Ascendancy in American Writing. (Indiana UP, 1992). An eminently readable work of scholarship by Professor Emeritus of American Studies at Notre Dame, Ronald Weber, and part of the (mainly historical) Midwestern History and Culture series (Madison & Schlereth, ed.). Weber’s work is that excellent type of scholarship in which readers trust the scholar’s detachment yet feel his zeal for the subject matter. Weber’s scholarly work has a broader focus than Barillas’ six-author format, which both expands its value yet restricts sustained close textual analyses. Like Barillas, his introduction is especially helpful for students wishing to get a feel for regionalist scholarship.

• Greasley, Philip A., ed. Dictionary of Midwestern Literature: Volume One: The Authors. (Indiana UP, 2001) Self-explanatory. A second volume is to be released, according to a contributing colleague of mine, precisely at “some time.” “These things take time,” she added.

• Longworth, Richard C. Caught in the Middle: America’s Heartland in the Age of Globalism. (Bloomsbury, 2008). So this work only tangentially focuses on literature and culture. The book is instead sociological and economic, its central thesis being that the Midwest has adapted poorly to globalization. I enjoy the book, though, because it is written by a fellow Iowan and because it is a call-to-arms, explicitly challenging readers to creatively adapt their regional home. Something is at stake. In addition, the book’s sociological and economic focus are nice “empirical glosses” on our study of nebulous words like “culture” and “regionalism.” Finally, the book starkly contrasts today’s midwest from the Midwest of the 1890s-1930s, a time period that many other scholars deem the area’s Golden Age for both literature and industry. Longworth also maintains The Midwesterner: Blogging the Global Midwest, a blog in conjunction with The Chicago Council on Global Affairs.

• Frederick, John T. Out of the Midwest: A Collection of Present-Day Writings. The late John Frederick was a fellow Iowan and founder of Midland, a regionalist literary journal at the height of Midwestern literary prominence, compiled an anthology of contemporary midwestern writings.  The anthology is available online free and in its entirety, including an enlightening introduction.

• Wuthnow, Robert. Remaking the Heartland: Middle America Since the 1950s. (Princeton: UP, 2012). Like Longworth’s Caught in the Middle, I include Robert Wuthnow’s piece as an enlightening bit of sociological analysis. Its central thesis: the Midwest is not the withering, atrophied wasteland but “has undergone a strong, positive transformation since the 1950s.”  In his introduction, Wuthnow admits he was originally “working on the assumption that the heartland was a place of withering decline...I thought that was the story that needed to be told. It made sense of small towns with empty storefronts. Large fields with no farmsteads. Reports of joblessness. But it did not square with other evidence. New technology. A surprisingly robust economy. Strong schools. An upbeat feeling among residents about the future. Clearly I needed to think harder about what was happening. By the time I finished with the research, I had a much different story in mind than when I started.”

• Cayton, Andrew R.L. & Gray, Susan E., ed. The American Midwest: Essays on Regional History. (Indiana UP, 2001). This anthology is perhaps second in scholarly worth only to the encyclopedia as all other subsequent works of scholarship on Midwest culture cite Cayton and Gray’s work. This collection of essays is the result of an experimental 1998 conference held at Miami University (Oxford, Ohio) in which historians pondered whether or not the Midwest had a regional identity--the same question that undergirds a course on Midwest Culture. The essays give a diverse but focused variety of topics: historian John Larson writes on his experience being hired by an open-air frontier museum in Indiana to dispel the folkish caricatures that had heretofore reigned among museum staff. These new historians and their more objective analysis, Larson reminisces, “were about as welcome as the Grinch who stole Christmas.” Nicole Etcheson discusses the Pioneer as the Midwest’s heroic yet unromantic archetype and ordinariness as a historic burden that can mask real issues of class and race. Quite simply, an impressive and enjoyable collection of essays.

In addition to these fine books of scholarship--the majority put out by Indiana UP to whom we owe a big “thank you”--there are more popular takes on the region, like Ian Frazier’s The Great Plains (only one half of the Midwest, we know) or My Kind of Midwest by John A. Jakle. Finally, there is the Society for the Study of Midwestern Literature, a scholarly society that seems to focus on contemporary works and is anticipating a conference on Midwestern “country noir.”

Such a spectrum provides a description of the majority of the work I’ve discovered on Midwest literature and culture. If I’ve passed over any great books or organizations, let us all know on our facebook page.

PS: My focus was on scholarly works. Have I narrow-mindedly missed great secondary sources (print or otherwise) for Midwestern culture by focusing on books published by university presses? More broadly, what ought to be a proper relationship between university work on regionalism and the actual region it studies?

Preview: Can those largely unmapped nineteenth-century territories of sprawling prairies known as “The West” be subsumed under the banner of the twentieth-century entity known as “The Midwest”? Or are they separate historical and cultural identities occupying the same geographic space? What exactly is the relationship of the West to the Midwest?