Making Connections At The Wormfarm 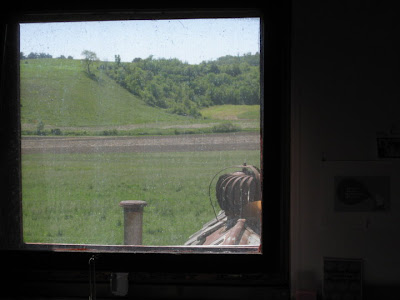 A view from a studio; from The Wormfarm Facebook page
The Wormfarm started in 1995 as a CSA, growing vegetables primarily for urban folks, so that urban-rural connection was always real important. And one of the things that we noticed was that the cultural component seemed to have an urban base and the food-production component was mostly rural--so we kept trying to find ways of linking those two things.
--Jay Salinas, Co-Founder of The Wormfarm Institute


A few months ago Andrew Taylor's blog The Artful Manager featured news of The Wormfarm Institute and its recent Wisconsin Governor's Award. As the above quote suggests, this is a farm that thinks about how culture and agriculture can be cultivated within the same acreage, and how rural and urban communities can find themselves linked through the process. Here's an excerpt from Mr. Taylor's discussion of the many programs and the many forms of work which emerge from these fields:

A particular favorite, for a while now, is The Wormfarm Institute, a combination of organic farm, artist residency, and cultural connector in rural Reedsburg, Wisconsin, working to ''build a sustainable future for agriculture and the arts by fostering vital links between people and the land.'' Artists in residency work 15 hours a week tending to the farm, and helping things grow. Artists also enhance the life and work of local farmers through the very cool Roadside Culture Stands project. The Woolen Mill Gallery provides a public space to connect the dots, as well (as in the current Smithsonian exhibit there).

The Woolen Mill Gallery, along with local taverns and restaurants, was also home this autumn to The Wormfarm's Fermentation Fest--a six week celebration of beer-making, canning, pickling, bread-making and, of course, the art of cheese. In the true form of a "cultural connector," all of these seminars and tastings were held in conjunction with The Smithsonian's Museum on Main Street program and its Key Ingredients exhibition.
Included below is a short film produced by the Wisconsin Foundation for the Arts to coincide with The Wormfarm's Governor's Award.
Posted by Matthew 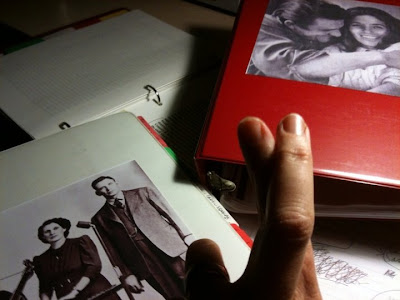 photograph by Beth Harrington; The Winding Stream Facebook page
I owe it to [this interview] that I was granted, to make sure it sees the light of day. It feels like a big trust has been placed upon me.
--Beth Harrington on Johnny Cash's final interview, which appears in The Winding Stream
As we look ahead to the new year, few things in our corner of the arts world are as exciting as the possibility of seeing The Winding Stream on silver screens across the country. This is a documentary project directed by Beth Harrington, an award winning musician, journalist and producer whose film Welcome to the Club--The Women of Rockabilly was nominated for a Grammy Award in 2003. The subject of this film will be near and dear to many of our readers' hearts: The Carter Family. While many other wonderful films have centered around A.P., Sara and Maybelle, The Winding Stream promises to trace a wider arc--from Clinch Mountain all the way out to the terrains of contemporary music:

The Winding Stream is the tale of the dynasty at the very heart of country music. Starting with the seminal Original Carter Family, A.P., Sara and Maybelle; this film-in-progress traces the ebb and flow of their influence, the transformation of that act into the Carter Sisters and Mother Maybelle, the marital alliance between June Carter and music legend Johnny Cash, and the efforts of the present-day family to keep this legacy alive.
A story that has never been told in its entirety. The Winding Stream covers the epic sweep of this family’s saga all in one film.  It is told by family members; including Johnny Cash, Rosanne Cash, Janette Carter, as well as the musicians they influenced. And their musical contribution is vividly illustrated in performances by roots music practitioners like John Prine, George Jones, Sheryl Crow, Kris Kristofferson and many others.

While this documentary touches on vital (and less-discussed) connections between traditional and modern music, between the country and city, the most important element of this story at the present moment is that The Winding Stream project could use our help. Ms. Harrington has set up a Kickstarter page so that her audience can support the costly production of this film. For those that may not have heard of Kickstarter, follow this link; this is an amazing organization that allows for secure individual funding of grass-roots arts projects.
No amount of copy on our part will serve to highlight the fantastic promise of this film more than a few of Ms. Harrington's clips. In the first, we get a chance to see a bit of the aforementioned interview with Johnny Cash:
The second clip tells the story of Maybelle Carter, the Nitty Gritty Dirty Band and the legendary Will The Circle Be Unbroken sessions--it can be found here, streaming in high-definition.  To see additional selections, please visit the film's website or join its Facebook page
Posted by Matthew

An Almanac For Moderns: Solstice to Christmas 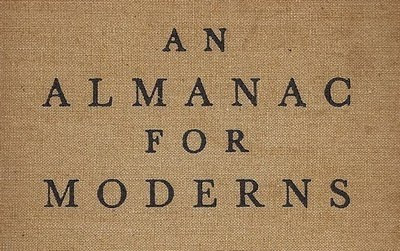 [More information on our Almanac For Moderns project and the work of Donald Culross Peattie can be found here.]
December Twenty-Second
Now is the darkest hour of all the year, the winter solstice. We are arrived at the antipodes of brave midsummer, when it was once the custom for men to while away the hours of the short night with bonfires and a blowing of conches and a making of wild young marriages, that men might hold the earth for the sun god during his brief descent beneath the horizon. But at this season of the year, when the sun was a pallid blur behind a junco-colored sky, a darkness fell upon the spirits of all men, and a splinter of ice was in their hearts. To some of us the winter solstice is an unimportant phase of terrestrial astronomy; of old it must have produced an emotional reaction which a Christian can only experience on Good Friday, and the breath-held Saturday that follows.
It is not the cold of far northern lands that drives the human animal to despair; cold is tingling, exciting, healthful, and it can, in a limited way, be overcome. It is the darkness that conquers the spirit, when the northern sun does not rise until late, only to skim low upon the horizon for an hour or two, and set. Now indeed is Balder slain of the mistletoe. Now life is at its lowest ebb, and the mind conceives a little what it will be like when the sun has burned to a red ember, its immense volume dissipated by constant radiation, and the earth drifted far out into space, the shrinking sun no longer able to hold her child upon a leash so close.
December Twenty-Fourth
When I set out to buy a Christmas tree, I have my choice of long-needled pines, red cedars, and fragrant spruces with narrow spire-like tops, the branches beautifully up-curved at the dark tips. But I am looking for a balsam, which has this inestimable advantage over all the spruces, that even in the warmth of the house its needles do not drop.
You may know a balsam from a spruce in this way, that the leaves of the balsam are flattish, and the cones are borne erect; on many of the branches the leaves are two-ranked, so that they appear to form a flat spray, while in the spruces the needles are scattered, bristling out in every direction from the stem, to the touch seeming four-sided; and the cones of a fir always droop.
Time was, not long ago, when a man bought a Christmas tree in all innocence, feeling that it was no really material expenditure but a symbol, almost intangible, which gave beauty and good cheer to all who beheld it. Now come the tree conservationists, to reproach us with the forests that we slay to make a brief holiday, to let them die then ingloriously upon the rubbish heap. But balsam is only used in a small way in the crafts and sciences, while the spruces, by far the commonest holiday trees, have, otherwise, only the pulp mill for their destiny.
And the Christmas trees cut for the city across the river would not suffice to put out the combined Sunday editions of its newspapers in one week, bearing into every home their freight of unchallenged intellectual poison--the brutal humor, the worldly inanity, the crime and psuedo-science.
December Twenty-Fifth
It was Francis of Assisi, I believe, the man who called the wind his brother and the birds his sisters, who gave the world the custom of exhibiting créche in church, where barn and hay, soft-breathing beasts, flowing breast and hungry babe, shepherd and star are elevated for delight. One who has spent a Christmas in some southern country, where an early Christianity still reigns, will understand how all else that to us means the holy festival is quite lacking there. It was originally, and still sometimes is, no more than a special Mass, scarcely as significant as Assumption, much less so than Easter. Out of the North the barbarian mind, forest born, brought tree worship, whether of fir or holly or yule log. It took mistletoe from the druids, stripped present-giving from New Year (where in Latin lands it still so largely stays) and made of Christmas a children's festival, set to the tune of the beloved joyful carols. It glorified woman and child and the brotherhood of men in a way that the Church in, let us say, the second century, dreamed not on.
You will search the four Gospels in vain for a hint of the day or the month when Christ was born. December twenty-fifth was already being celebrated in the ancient world as the birthplace of the sun god Mithras, who came out of a rock three days after the darkest of the year. His birth was foretold of a star that shepherds and magi beheld. The ancient Angles had long been wont to hold this day sacred as Modranecht or Mother Night. This still do we flout old winter with green tree, and old morality with child worship.
Posted by Matthew 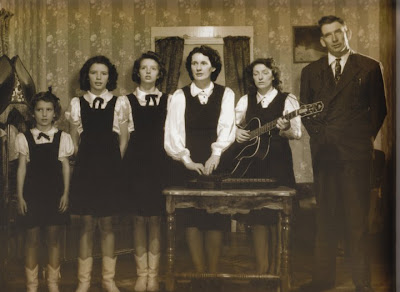 The Carter Family; from the Facebook page of The Winding Stream documentary project
Our regular readers will have no doubt noticed that the rate of material posted to The Art of The Rural has significantly slowed over the last three months--and has come down to trickle in the last few weeks.
Far from reflecting a general lack of interest on our part, this slow-down is caused by one simple fact: your humble editor is preparing to take the Qualifying Exam for his PhD in two weeks. While I can assure everyone that I am indeed spending a lot of time thinking about the rural arts, traditional and modern, my attention been directed towards those ends.
We'll be remedying the situation by offering some summative "year in review" posts beginning next week. We also have a few more articles slated to appear before 2011 knocks on the door. The fantastic Winding Stream documentary project linked above is among these future posts.
We are very excited about 2011: we will begin to hear from our Rural Arts Correspondents, and we will be featuring an updated and widely-expanded Rural Arts Map with a related comprehensive site of rural arts links. There are some other exciting additions to the site which we'll unveil after the new year...so stay tuned, and thanks for your patience.
Posted by Matthew