T.S. Eliot Among The Cows 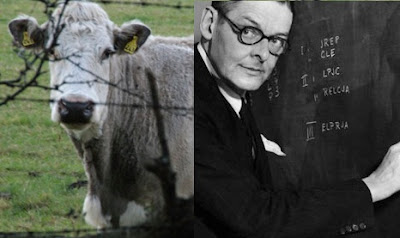 By Ian Halbert
In a previous post I discussed the habit of Robert Frost’s father tippling cups of ox blood for to cure his consumption. This week, I have read Peter Ackroyd’s biography of T.S. Eliot and have come upon another curious bit of ruralia.
Eliot, the high priest of modernity and urbanity is not one we imagine to have had much of the rural in him, and we are not wrong in thinking so. Nevertheless, he spent much of his adult life visiting the English countryside, usually for restorative and curative purposes, nervous and sickly man that he was. Still, this countryside really has no actual place in his poetry, save maybe in the grand abstractions he built out of Burnt Norton, East Coker, The Dry Salvages and Little Gidding in his master work, Four Quartets, where for example he speaks of “We, content at the last / If our temporal reversion nourish / (Not too far from the yew-tree) / The life of significant soil.” This “significant soil,” whatever it may be, is not habitable ground.
As I read, I discovered that Eliot had a life-long aversion to large animals. As a bit of illustration, Ackroyd tells of a curious story on one of his trips to the country town of Chipping Camden, Gloucestershire with an old college girlfriend. It seems on one walk the Nobel Laureate was nearly trampled by a boisterous heifer and only escaped by diving into a mulberry bush! To commemorate the event he composed this little bit of light verse for the children of Frank Morley, a close friend in the publishing business:


Of all the beasts that God allows
In England’s green and pleasant land,
I most of all dislike the Cows:
Their ways I do not understand.
It puzzles me why they should stare
At me, who am so innocent;
Their stupid gaze is hard to bear —
It’s positively truculent.
I’m very inconspicuous
And scarlet ties I never wear;
I’m not a London Transport Bus,
And yet at me they always stare.
You may reply, to fear a Cow
Is Cowardice the rustic scorns;
But still your reason must allow
That I am weak, and she has horns.
But most I am afraid when walking
With country dames in brogues and tweeds,
Who will persist in hearty talking
And stopping to discuss the breeds.
To country people Cows are mild,
And flee from any stick they throw;
But I’m a timid town bred child,
And all the cattle seem to know.
But when in fields alone I stroll,
Oh then in vain their horns are tossed,
In vain their bloodshot eyes they roll —
Of me they shall not make their boast.
Beyond the hedge or five-barred gate,
My sober wishes never stray;
In vain their prongs may lie in wait,
For I can always run away!
Or I can take sanctuary
In friendly oak or apple tree.

You can read more about the incident here. Cows, the countryside and the realities of rural life were once common fodder for poets and their poems. There seems in this strange little incident something somehow symbolic of our way of life: One of the greatest poets of our age eye to eye with a cow, unnerved by its “stupid gaze.” Paradoxically, Eliot had an easier time staring into the The Waste Land of the western tradition, than into the simple, innocent life snorting there before him. Something in that scenario seems deeply unpoetic, no?
Posted by Matthew