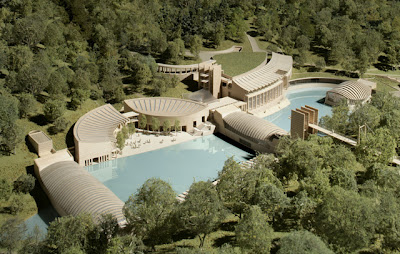 Later this week we will feature Contributing Editor Rachel Reynolds Luster's commentary on The Crystal Bridges Museum of American Art, a new complex scheduled to open this November in Bentonville, Arkansas. The site, of course, is no coincidence, as the force behind Crystal Bridges is none other than Alice Walton: a Walmart heiress whose assets are now valued at over $23 billion dollars. While Rachel Reynolds Luster, an Arkansas native, will offer her perspective on Crystal Bridges and its place within the region, today I will present a few contextual links. As both its supporters and detractors agree, Crystal Bridges will reshape the conversation within American museum culture and within the American arts as a whole--indeed, Ms. Walton's high-profile acquisitions have been causing waves for years.
I would first recommend Carol Vogel's recent New York Times article, "A Billionaire’s Eye for Art Shapes Her Singular Museum," as it contains an interview with Ms. Walton. (The New Yorker also has a recent feature, accessible to subscribers) Here are the opening paragraphs:

The era of the world-class museum built by a single philanthropist in the tradition of Isabella Stewart Gardner, John Pierpont Morgan Jr. and Gertrude Vanderbilt Whitney may seem to have passed, but Alice L. Walton is bringing it back.
Yet her mission is unlike those of her predecessors, or of more recent art patrons like Ronald S. Lauder and his Neue Galerie. They set out to put great works on display in cultural capitals like New York and Boston. Instead, Ms. Walton’s Crystal Bridges Museum of American Art — the first major institution in 50 years dedicated to the vast spectrum of American art, to be housed in a building more than twice the size of the current Whitney Museum of American Art — seeks to bring high art to middle America here in this town of 35,000 that is best known as the home of Wal-Mart.

Ms. Walton, the daughter of Wal-Mart’s founder, Sam Walton, has worked on the museum for nearly a decade, but has said little about it in public until now. In a recent interview at Town Branch, her family home here, she said she wanted to turn Bentonville into an international destination for art lovers when the museum opens on Nov. 11. At the moment the most significant nearby cultural attractions are two hours away: a museum of Western and American Indian art in Tulsa, Okla., and, in the other direction, the country-music magnet of Branson, Mo.

Especially after yesterday's commentary of the Kansas Arts Veto, a number of loaded cultural markers dot the landscape of these first few paragraphs: world-class, high-art, middle-America, cultural attractions. With all of these notions staked to the presumably small "town" of Bentonville, Arkansas, Crystal Bridges simultaneously takes advantage of rural-urban and high-low culture binaries just as it works to refute them. And this is not to mention the regional dynamic itself, of Arkansas and the Ozarks within the broader American consciousness--a factor Rachel will speak to in her commentary.
Lisa Pruitt of Legal Ruralism has addressed the question of Bentonville, and its rural "heartland" status, on two recent occasions. Her critique of a Los Angeles Times piece last month zeroes in on how journalists are reading, or misreading, the rural component to this story:

But what really caught my attention was the lede's use of the word "rural":

It makes for a good story, but the munificent $800-million gift from the family that owns Wal-Mart, meant to endow programs and operations at Alice Walton's under-construction art museum in rural Arkansas, is not the largest such gift ever made to a U.S. art museum.

It seems to me that the writer uses the adjective "rural" here to diminish the place--just as the story also puts the museum endeavor in perspective (the largest endowment, the journalist informs us, was from J. Paul Getty to the Los Angeles art museum that bears his name because, adjusted for inflation, that gift would be three times the Walton gift to the Crystal Bridges Museum of American Art). Otherwise, why use such a geographical descriptor at all? Perhaps to distance and distinguish the place from uber-urban LA?

The commentary in Legal Ruralism adds a finishing touch to this excellent ARTINFO critique by Ben Davis. He refers to both the New Yorker and the NYT piece as "object lessons in embedded biography [that sacrifice] critical conscience for access to one of the world's richest women." Mr. Davis places the news of Crystal Bridges alongside the inescapable events unfolding in the Supreme Court: the Walmart class-action lawsuit on the behalf of 1.5 million women. The dismissal of this case, just as Crystal Bridges is receiving a new wave of media attention, links the art itself to the mode in which its necessary capital was acquired. In addition, this news complicates these rural-urban, high-low binaries (even if they are false binaries):

The tale being told here is that of an outsider from Arkansas who somehow has won over the art establishment (could it be through the loads and loads of cash she has lavished on art-buying?), but who still faces discrimination from snobs who just don't believe there can be a great art institution in what Walton calls "heartland America." As she told the Times about her dealings with the East Coast establishment, "A lot of people there don't really know this part of the world, really don't know the people here and the desire and the need for art." Touching on the uproar that greeted Walton when she bought Asher B. Durand's "Kindred Spirits" from the New York Public Library — an act that caused critics to cry that the Big Apple was being robbed of its patrimony — Crystal Bridges director Dan Bacigalupi tells the New Yorker's Mead, "You could extend that argument, and say no works of art belong in Arkansas, and that is an absurd thing to say." (Tony art types, meanwhile, may really not be happy in Bentonville, Mead suggests — the town currently only "offers the kind of hospitality-chain establishments guaranteed to dismay bicoastal types." Those snobby bicoastal types.)
The fact that the profile dwells on these issues seems to be a way to deflect the more meaningful controversies that have circled around Walton's art museum. There may indeed have been some snobbery in some of the ruckus about the Durand being spirited away from New York. But the most sophisticated critique, that of Rebecca Solnit in TomDispatch, was really more about how the proto-conservationist and pro-labor values that formed the background for the painting of "Kindred Spirits" were fundamentally out of step with the values represented by Walmart: ugly sprawl and poverty wages. And that critique is mentioned in the New Yorker, but fundamentally left unaddressed.

At the risk of merely excerpting Mr. Davis's entire editorial, let me simply recommend that folks make time to consider his points, as he continues from here to discuss the collection itself (which is weak on more contemporary American work) and the Crystal Bridges' alledged manipulation of state government.
For further reading, consider Lee Rosenbaum's article "The Walton Effect: Art World is Roiled by Wal-Mart Heiress," Though the piece was published in the Wall Street Journal in 2007, it captures the early narrative of how Alice Walton was perceived by some as a "hovering culture vulture." Ms. Rosenbaum writes the influential CultureGrrl blog at ArtsJournal (highly recommended), and this 2009 article will also provide some context on the controversies surrounding the building of Crystal Bridges.
Indeed, Ms. Rosenbaum published her critique of the New Yorker piece yesterday, and her penetrating assessment of Carol Vogel's New York Times article can be read here as well. Beyond the other other issues tied up in Crystal Bridges, Ms. Rosenbaum suggests that the kind of rhetorical strategies which made Walmart such a profitable force may not hold similar sway with arts audiences:

As Vogel noted (and as I was also told by the museum's curators), it wasn't until 2005 that Alice began collecting with the museum in mind. Her holdings before that were, for the most part, of less importance, as I was informed during my visit.

That recent conversion to serious collecting is part of what makes the first paragraph of Vogel's article so eyebrow-raising: The other great museum founders whom she placed in the same league with Walton had put the horse before the cart: They were already voracious acquirers of great things before they envisioned creating a facility to institutionalize their collecting achievements and share them with the public.

Crystal Bridges will rise or fall on its collection. No amount of grandiose architecture and daring feats of engineering (for both the museum facility and the landscape) can trump the as-yet-unknown depth, breadth and quality of the collection. 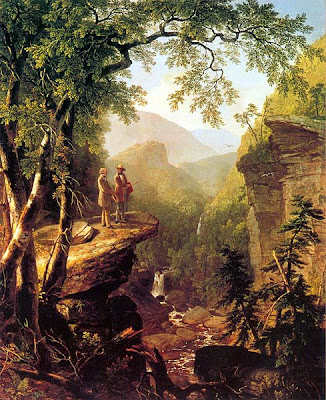