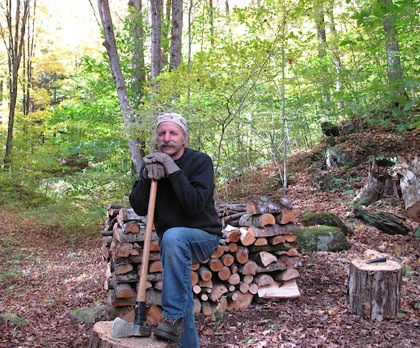 Bob Arnold in the Woodlot; photograph by Susan Arnold, published in Jacket
In the wake of Hurricane Irene, national attention has turned from the deserted streets of New York City to Vermont, where flooding has destroyed roads, isolated communities, and posed a massive logistical challenge to the state's citizens. While our thoughts go out to folks in the area, today I offer a poet who exemplifies the resourcefulness and good will that's so common amongst Vermonters, and which we'll see on display as they set about the tough work of cleaning up and rebuilding their communities.
Poet, publisher, editor, lumberman, and stonemason Bob Arnold is an internationally regarded literary figure, yet his presence in the field and in his place is entirely of his own creation. Mr. Arnold's story of personal and poetic growth in part fits into what we might expect out of a New England upbringing, yet his many forms of work are also indebted to forms of art and consciousness that emerged in the 1960s in America -- and internationally. Jacket magazine (an outstanding online poetry journal) has published a series of valuable conversations with Mr. Arnold about his poetry, his editorship of the widely-acclaimed Longhouse Press and the intersections of life, work, and art. These interviews are not only the best introduction to the poetry of Bob Arnold, but they are also, in themselves, exciting conversations about living and creating thoughtful and intentional work in our daily lives.
Here's Mr. Arnold talking with Kent Johnson about some of the experiences which go into the creation of his poems:

I have very little to write about until I’m out in life living it. This means with the chainsaws, the hammers, the stonework, the woods, the fields, the river, and with the girl, Susan. It’s been that way for almost 40 years and I’m doing everything within my powers to make sure it doesn’t stop. Even if a lot of the time it seems fueled on a dream, gritty determination and the greatest thing that ever hit town, team-work. I can’t say enough for love and marriage. And I know that thought is going to make some smile, and make others grimace...I think the key is staying loose, eyes open, available and even vulnerable, open for a pass. It’s downright athletic. After a life of cutting trees, roofing homes, huts and barns, cribbing up old shacks and cabins and houses, painting and painting, raking and raking, wood-splitting & wood-splitting, the body and the mind get to know one another. If you develop the mind along with the body, it could become a lantern burning bright.
Of course I must tip my cap to my background — a flinty Irish mother from Belfast with a large family of storytellers and hard workers, lots of kids. And on my father’s side, all lumbermen, mainly businessmen when I was born, but all the forefathers were choppers, sawyers, drivers, mountain butchers. The businessmen wanted the oldest son, me, to learn the ropes, so I was dropped into the lumberyards at age ten and worked every day after school with more Irishman and Poles and all through each summer — first unloading boxcars of western and eastern lumber and loading truck deliveries, and then when I was a little older, receiving those truck deliveries on some muddy hillside with a carpentry crew and two or three spec houses going up. The plan was to teach me the business and then after college go into the business. Put on a tie. Instead, the sixties got in the way, with its music and rebellion and tribal strength, and I barely got out of high school.

Here's "No Tool or Rope or Pail" from the collection Where Rivers Meet:

It hardly mattered what time of year
We passed their farmhouse,
They never waved,
This old farm couple
Usually bent over in the vegetable garden
Or walking by the muddy dooryard
Between house and red-weathered barn.
They would look up, see who was passing,
Then look back down, ignorant to the event.
We would always wave nonetheless,
Before you dropped me off at work
Further up on the hill,
Toolbox rattling in the backseat,
And then again on the way home
Later in the day, the pale sunlight
High up in their pasture,
Our arms out the window,
Cooling ourselves.
And it was that one midsummer evening
We drove past and caught them sitting
together on the front porch
At ease, chores done,
The tangle of cats and kittens
Cleaning themselves of fresh spilled milk
On the barn door ramp;
We drove by and they looked up—
The first time I've ever seen their
Hands free of any work,
No too or rope or pail—
And they waved.

Bob Arnold and his wife Susan oversee Longhouse Press with a mission to produce books of poetry to the highest standards of craftsmanship. For over thirty years they have stewarded the work of an extraordinary range of poets from America and beyond, as well as serving an integral role in continuing the mission of their close friend Cid Corman's journal Origin. In addition to this work, Mr. Arnold is literary executor both for Mr. Corman and (after Corman's passing) Lorine Niedecker. Thus, a tremendous amount of artistic energy is cultivated on the grounds of the Arnold's Vermont farm.
This leads us to another element of Mr. Arnold's work that I would encourage readers to explore: the poet's most recent book, Yokel. While he has a reputation for creating some of the finest short verse, Mr. Arnold's new effort is what he calls "a long Green Mountain poem." (Folks can read enthusiastic early reviews here and here) Within these pages, the poet thinks through a number of issues that many rural citizens, policymakers, and fellow artists are also grappling with: how to preserve, and how to faithfully carry forward into modern life, the traditions and local memories of a rural place. Again, here's Mr. Arnold in conversation with Kent Johnson last year:

I’ve just completed a 105 piece long poem called Yokel that took ten years to write. It’s farm narrative and portraits and outdoor work poems covering four decades of watching this old life and tradition around me disappear from the map. It just couldn’t be done with small poems only — just as Basho’s travel notebook had to be pinpoint poems compassed around a netting of anecdotes and ruminations. My long poem Yokel has big brawny pieces wide as the barn door and a river sounding endless to the ears. It takes the architecture of a long poem to carry that span.

We will be presenting more of Bob Arnold's poetry and art later this week. Until then, folks can visit Longhouse Press, which features many of his poetry collections as well, to learn more. Necessary reading also includes Mr. Arnold's blog Longhouse Birdhouse, where he reports today that the roads around their farm have been washed away by Hurricane Irene, but he and his neighbors are safe. By his estimation, it may be weeks or months before crews can restore these local roads; "many are taking matters into their own hands," he writes, "which is always a good sign."