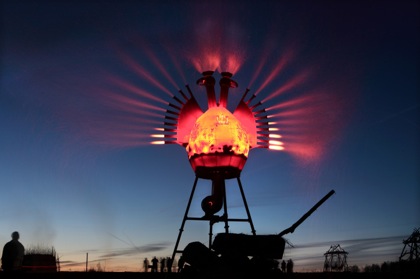 The Firebird at Nikola-Lenivets; photograph by Nikolay Polissky. *Full description below
We are fashioning this life from scratch. Go, find a stick, and make something.

Over the last two weeks I've tried to offer some examples of how we can use art to expand what we talk about when we talk about the rural. Here is our first international model (next week: the Luk Thung release by Dust-to-Digital).
Too often we tend to segregate artmaking along geographic lines: urban art is cutting-edge and "contemporary" while rural art is folksy and "traditional." Of course, you can find examples that prop up this cliche--but it ignores the whole field of urban folk art and turns its back on rural artists who are combining the traditional and the contemporary to stunning effects.
Nikolai Polissky would have something to say about this. This Russian artist has spent the better part of a decade transforming his village of Nikola-Lenivets into a town brimming with art--and with citizens who consider themselves art-makers. Depressed after the collapse of the town's state-run agriculture commune, local morale had hit rock bottom. Mr. Polissky's vision, while greeted with skepticism at first, has led to the village becoming an international art destination and even opened the door for the artist and the villagers to travel beyond their home to create their massive site-specific installations (most recently at the Venice Biennale) that balance folk practices with commentary on contemporary life. Below, Sophia Kishkovsky tells the story in The New York Times:

“I lived here for 10 years,” said Mr. Polissky, a native of Moscow who arrived in Nikola-Lenivets in 1989 as a painter and a member of Mitki, a whimsical Soviet underground art collective started in Leningrad, where he studied. “Then I was pulled into the actual landscape.”

The village is in a national park called Ugra and had just a handful of surviving full-time residents before Mr. Polissky arrived, accompanied by the Moscow architect Vasily Shchetinin. Many people there and in surrounding villages were left without work after the collective farm fell apart. Vodka became a main distraction.

“Everyone drank,” the artist said of village life before 2000, when the art projects began. “People were simply dying off. It was like a strike against the authorities.”

Now, works made under Mr. Polissky’s direction of logs, branches, twigs and metals are scattered along nearby riverbanks and fields.

I don't think I need to spell out the direct parallels between Nikola-Lenivets and the situation facing many rural communities, many rural towns that have been hurting since the farm crisis of the 1980s. My feeling is that if Mr. Polissky is accomplishing this in Russia, we can do the same here -- we can take what we see as challenges and work to transform them into assets. Folks are already doing this valuable work--please see our previous writing on The Art Farm and The Wormfarm Institute, and please send us other examples that fit this framework as well.
Here's a few examples of what's happening in Nikola-Lenivets, with many more projects available to explore here: 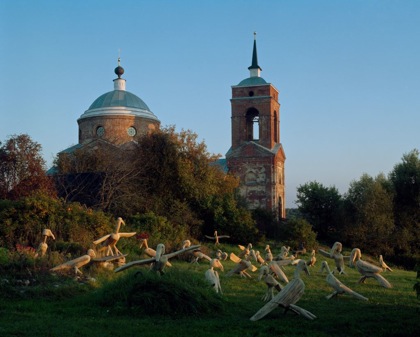 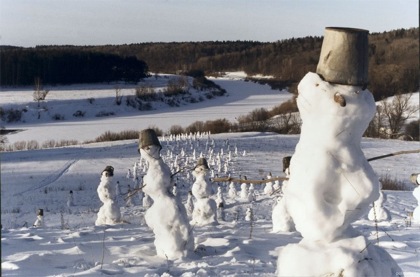 Snowmen, 2000
*Mr. Polissky's caption for the Firebird image above, from ArtReview: At Shrovetide 2008 Nikolay Polissky presented a project which is a continuation of the ideas in ‘Borders of Empire’: a Firebird made of metal. Of enormous size — as big as a house, — this metal two-headed eagle with a built-in stove lit up in a terrifying fashion, flared, filled the whole field with back smoke, and then started to give out tongues of flame, and itself changed colour from black to dark red. The damp air and wet earth underneath the bird started spitting with the heat. In the course of just 20 minutes, the bird consumed two large lorry-loads of wood. All in all, this was an impressive image of the Russian state.
Posted by Matthew