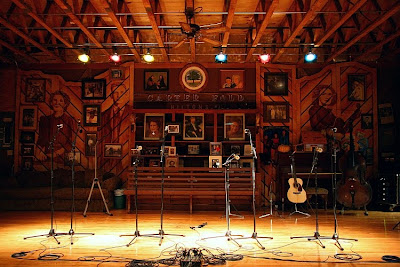 
"He insisted on walking into the Fold that night," Hiltons resident Pat Jones told me a week after Johnny's performance. "They wanted to bring him in using a wheelchair, but he said no, he wanted to walk up to that stage himself."
Whenever I have friends that are looking to take a trip somewhere, one of the first places I recommend is The Carter Family Fold in Hiltons, Virginia. A few years back, I had the chance to attend one of their Saturday evening concerts and hear Janette Carter sing "I'm Thinking Tonight of my Blue Eyes." It's one of the songs that her father and mother, A.P. and Sara, along with aunt Maybelle, immortalized in an early Carter Family recording. Though Janette was frail, she was helped to the stage so that she could take the autoharp and begin the night's music with that selection from her family's legacy.
As she sang, I looked around. Underneath the generous tin roof, families and young couples sat and listened, children ran across the dance floor in front of the stage. It was an atmosphere and an inter-generational audience that harkened back to a time when traditional music--folk music--was actually sung and enjoyed by "folks", not cloistered behind the turn styles of cafes and concert venues. Ms. Carter and her brother Joe created the Fold in 1979 to honor her family and to give a piece of her family's heritage back to the community. When I walked in, I felt at home: large paintings of the Carters adorned the stage, homemade chili and pie beckoned from a window in the back, and a sign reminded me this was hallowed ground: no smoking, no drinking, no cursing.
A few months after Ms. Carter's song, she passed away. Here's Joe Wilson, President of the National Council for the Traditional Arts, remembering Ms. Carter and her legacy at the Fold:

Luckily, video exists of this historic evening:
Posted by Matthew