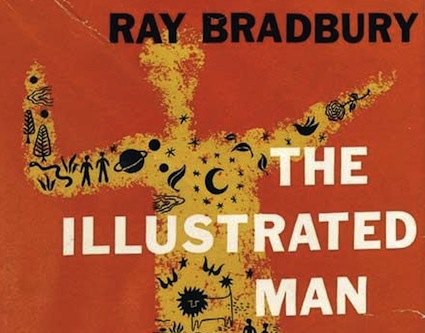 Perhaps tied with Jules Verne and J.R.R. Tolkien, Ray Bradbury may be my longest-running literary friend. His leatherbound anthology was on my nightstand for the past few months and I'd just read "The Last Night of the World," oddly enough.

His works initially sucked me in as a grade schooler on the mere creativity of their fantasy premises: incessant Venusian rains that could wash the pigments from one’s skin, a murderous hi-tech house, robot clones who fell in love with their masters’ wives. For a kid who liked comic books, the stuff was as golden as Martian eyes and apples of the sun. This initial luster was all LA and Hollywood--wizbang scifi ideas.

I kept returning to Bradbury, however, because the psychological depth of the stories grew with me. He was in that deeply-introspective American literary tradition of Hawthorne which I would grow to love.

And I return today to Bradbury to claim but a small piece of his Hollywood legacy for the Midwest. One obituary briefly deemed Bradbury’s work colored with “Midwest populism”--not taking the time to explain what exactly that could mean--and many others refer to him as a “Midwest surrealist,” mostly based upon his trilogy of bildungsromans based in his hometown of Waukegon, Illinois: Dandelion Wine (‘57), Something Wicked This Way Comes (‘62), and Farewell Summer (‘06).

Bradbury’s status as a Midwesterner--more accurately a dual-citizenship with LA--seems safe to me based on these three novels alone. Even more, though, this Midwestern-ness spills into his other works. 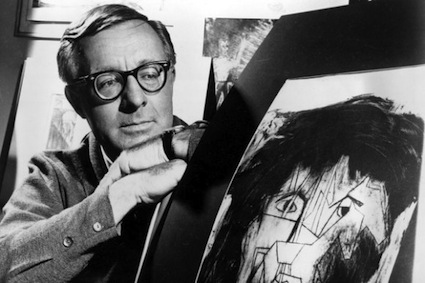 Growing older, I discovered in Bradbury’s short stories echoes of that Midwestern opus, Winesburg, Ohio. They weren’t just deeply, Protestantly introspective--Faulkner too grew out of Hawthorne in that respect. They were laconic, more restrained (or repressed) than violent. The extraordinary sci-fi premises of Bradbury’s stories--the Hollywood--were always captured in the plainest of prose and set in motion with rather ordinary characters and their rather ordinary, quiet struggles. Bradbury’s Anns, Toms, and Susans were bourgeois, heartland vanilla. Moderate. Normal. Nice. But amazing stories lay just beyond their heartland propriety.

The Illustrated Man and his interlocutor are representative.

It was a warm afternoon in early September when I first met the Illustrated Man. Walking along an asphalt road, I was on the final leg of a two weeks’ walking tour of Wisconsin. Late in the afternoon I stopped, ate some pork, beans, and a doughnut, and was preparing to stretch out and read when the Illustrated man walked over the hill and stood for a moment against the sky...

...He seemed only to sense my presence, for he didn’t look directly at me when he spoke his first words:

“Do you know where I can find a job?”

“I haven’t had a job that’s lasted in forty years,” he said.

Though it was a hot late afternoon, he wore his wool shirt buttoned tight about his neck. His sleeves were rolled and buttoned down over his thick wrists. Perspiration was streaming from his face, yet he made no move to open his shirt.

“Well,” he said at least, “this is as good a place as any to spend the night. Do you mind company?”

“I have some extra food you’d be welcome to,” I said

He sat down heavily, grunting. “You’ll be sorry you asked me to stay,” he said. “Everyone always is. That’s why I’m walking. Here it is, early September, the cream of the Labor Day carnival season. I should be making money hand over fist at any small town side show celebration, but here I am with no prospects.”

He took off an immense shoe and peered at it closely. “I usually keep a job about ten days. Then something happens and they fire me. By now every carnival in America won’t touch me with a ten-foot pole.”

“What seems to be the trouble?” I asked.

For answer, he unbuttoned his tight collar, slowly. With his eyes shut, he put a slow hand to the task of unbuttoning his shirt all the way down. He slipped his fingers in to feel his chest. “funny,” he said, eyes still shut. “You can’t feel them but they’re there. I always hope that someday I’ll look and they’ll be gone. I walk in the sun for hours on the hottest days, baking, and hope that my sweat’ll wash them off, the sun’ll cook them off, but at sundown they’re still there.” He turned his head slightly toward me and exposed his chest. “Are they still there now?”

After a long while I exhaled. “Yes,” I said, “They’re still there.    The Illustrations.  ..

...“How long have you been Illustrated?”

“In 1900, when I was twenty years old and working a carnival, I broke my leg. It laid me up, I had to do something to keep my hand in, so I decided to get tattooed.”

“But who tattooed you? What happened to the artist?”

“She went back to the future,” he said. “I mean it. She was an old woman in a little house in the middle of Wisconsin here somewhere not far from this place. A little old witch who looked a thousand years old one moment and twenty years old the next, but she said she could travel in time. I laughed. Now, I know better.”      …“So people fire me when my pictures move. They don’t like it when violent things happen in my Illustrations. Each Illustration is a little story. If you watch them, in a few minutes they tell you a tale. In three hours of looking you could see eighteen or twenty stories acted right on my body, you could hear voices and think thoughts.”      …I lay back a few feet from him. He didn’t seem violent, and the pictures were beautiful. Otherwise I might have been tempted to get out and away from such babbling. But the Illustrations...I let my eyes fill up on them. Any person would go a little mad with such things upon his body.

The night was serene. I could hear the Illustrated Man’s breathing in the moonlight. Crickets were stirring gently in the distant ravines. I lay with my body sidewise so I could watch the Illustrations. Perhaps half an hour passed. Whether the Illustrated Man slept I could not tell, but suddenly I heard him whisper, “They’re moving, aren’t they?”

I waited a minute.


POST-SCRIPT + PREVIEW: With the wonderful response on AOTR’s facebook page, I’ve decided to include this “PS+Preview” at the end of every post. Here I’ll look for your response to the current post and input on the post to come—to keep this experiment as democratic as possible.PS: Is Bradbury more Hollywood or more Midwest?Preview: My next post will risk boredom by looking for secondary rather than primary sources on the Midwest. Are any of you involved in some form of “Midwest Studies” (publications, conferences, societies, etc)? Does such a field formally exist? Do you have any favorite secondary publications on the culture of the region?
Posted by Matthew