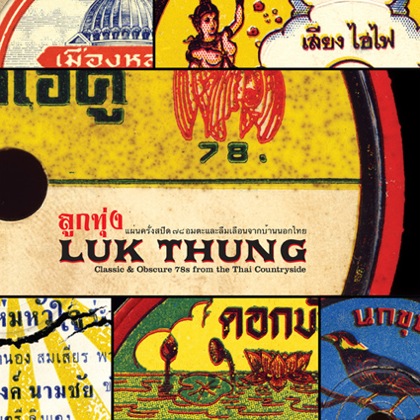 A few weeks back, I began an unofficial series of pieces that look to expand what we talk about when we talk about the rural, and today I'd like to discuss a recording that can challenge us to rethink our own categories and boundaries when it comes to rural arts and culture.

Luk Thung: Classic & Obscure 78s from the Thai Countryside is one of the latest releases from Dust-to-Digital, a record label that has, for over a decade, consistently produced some of the most thorough and thought-provoking reissues of vernacular music and visual art--everything from the southern gospel of their landmark Goodbye, Babylon set to the forthcoming Opika Pende: Africa at 78 RPM, a multi-disc package featuring diverse pan-African music that has never been released on CD. Luk Thung is one of the productions of the "phonographic arm" of Dust-to-Digital, Parlortone, though this music is also available for download. Luk Thung was compiled by record collector David Murray (see his Haji Maji music blog) and the notes were written by Peter Doolan of the Monrakplengthai Thai vernacular music site.

Many of our readers are no doubt familiar with the work of Dust-to-Digital; as both a record label and a kind of cultural sensibility, Lance Ledbetter's project has not only served as a catalyst for the thriving reissue movement, but has pushed an audience to reconsider the deeper dynamics of a place and its people.

Luk Thung continues in this direction, and provides an opportunity for many of us to expand our own deeper narrative of the rural arts. While many discussions of rural culture fail to consider the role of the rural diaspora, I cannot think of a single instance where we've thought of this geographical movement--from the Great Migration to the farm crisis of the 1980s--in an international context. Luk Thung provides such an opportunity.

Here's Peter Doolan, editor of the Monrakplengthai music site, writing in the introduction to his liner notes:

Luk Thung is known to many as Thailand's "Country Music"; it's a vibrant and syncretic genre of pop song which aims to give voice to a disenfranchised rural population. Its history is intextricably linked to that of the nation at large, and it continues to provide a soundtrack to the political turmoil that abounds in today's Thailand. Despite its commercial nature and its roots in imported music, Luk Thung's use of local Thai melody, instrumentation, rhythm and vocal styling leads many casual listeners to mistake it for a sort of folk music. In any case, Luk Thung may indeed be filling the social gap left by a slowly vanishing traditional culture.

The term Luk Thung itself, meaning "Children of the Fields," refers to people of rural background, as opposed to Luk Krung, those born and bred in the city. Bangkok, the capitol of the Kingdom of Thailand, is a massive metropolis disproportionate to the rest of the country, and is, without rival, its political, economic and cultural center. The majority of Thailand's population, however, lives in the provinces outside of Bangkok, as has been the case for millenia. But in the 20th century, spurred by the nation's increasing status as a global commercial power, the capitol began to attract significant movement in from the provinces. By mid-century, a steady stream of migrants were making their way into Bangkok, with most joining an urban underclass of menial laborers, pedicab drivers, market vendors or slum dwellers. Some settled permanently in the city, some came and went with the seasons, but all had to cope with enormous changes in their lives. Music became a vital means of maintaining a feeling of connectedness to the world they were leaving.

As Mr. Doolan tells us in his extensive notes, this rural diaspora first met a state-controlled mass media that privileged western culture (everything from dress to dining utensils) and denigrated traditional Thai practices. After World War II, these forms of expression were re-integrated, as pop music blossomed into a complex and kinetic exchange of idioms, instruments, and experiences; in balancing these various sources and influences, these artists created what I've called before a kind of "rural modernism." Consider the breadth of expression Luk Thung incorporated: "Liké street theatre, antiphonal Lamtat field songs, and Klong Yao long-drum troupes," Mr. Doolan writes. "A particular interest was kindled in songs from Isan, the impoverished and drought-stricken Northeast...singers integrated both Isan's Thet Lae preaching style and Lam Klon poetic form into their performances, and many even began including words from Isan's distinct dialect in their lyrics."

From Peter Doolan's extraordinarily helpful notes we see that these musicians were working in a vein not at all that stylistically different than James Joyce or T.S. Eliot, or any of the modernist painters who incorporated a wildly divergent range of materials and images. Further, the span of Luk Thung runs the American timeline from the Great Migration to today, and from the explosion of folk, blues, country and rock music--all fueled in large part by what a rural diaspora brought with them to the city and its airwaves and recording studios.

Here's Phloen Phromdaen singing "Ruedu Haeng Khwam Rak (Season of Love)." Mr. Phromdaen, who grew up on his family's farm along the border with Cambodia, first encountered Luk Thung on the radio and saved his money to make his own recordings. A rise to stardom followed and was punctuated, Mr. Doolan tells, by his 1966 hit "Chom Thung (In Praise of the Fields)." Phloen Phromdaen is still singing today.

Mr. Phromdaen went on in his career to create a variant of Luk Thung called Pleng Phut, or "talking music," a development which seems to suggest, if we are thinking in terms of a rural diaspora, a comparison with Johnny Cash, or Elvis, or Muddy Waters or any number of other musicians. As Mr. Doolan writes, these musicians attained a level of stardom in their home country commiserate with the likes of their American counterparts. Given the cultural and political backdrop to Luk Thung, we find many similarities to the social commentary within the language of American folk, blues and country--even to the rebellious use of identity and dialect in "hard country," as discussed by Barbara Ching in her essential book-length study Wrong's What I Do Best.

Lastly, what such a vibrant release as Luk Thung can stir in us is the thought that, even within our own home borders, we may live near folks who most likely identify on one level or another as members of a more distant "rural diaspora," be it from Thailand, Mexico, Somalia or elsewhere. We do a disservice to these members of our community--and to ourselves--when we leave them out of a discussion on rural America.
Posted by Matthew