Pulling Art Out Of Iowa's Rivers 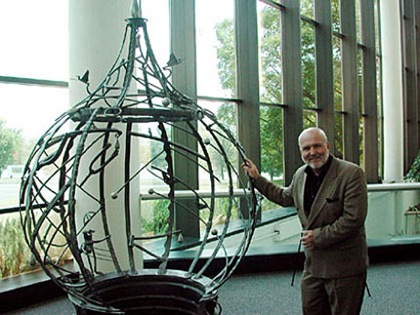 David Williamson with one of his sculptures; Iowa Arts News

Folks, I am spending a long weekend on our family farm in the Ohio Valley, so postings over the next few days may occur at odd intervals -- though I will be featuring some of Bob Arnold's backwoods chalkboard poetry-installations, so look out for that as well this weekend.

Many thanks to Deborah Woodell for passing news of this along: artist David Williamson has created an opportunity for everyday Iowans to not only witness but also participate in the process of creating large scale sculptures--with some surprising materials.

This Wednesday's episode of NPR's Talk of Iowa featured a conversation with Mr. Williamson about his project of working with Iowans, as well as a DNR watershed project (AWARE), to salvage metal and other materials from Iowa rivers and then transmute these objects into sculptures. Here's Iowa Arts News writing about his work:

This summer, Williamson will create his third sculpture as part of Riverse series, his effort to demonstrate the continued usefulness of objects that in some cases have spent years on the muddy bottoms of Iowa’s waterways.

Of the estimated 24 tons of material volunteers retrieved this year, Williamson has about eight tons of metal from which to create this year’s work.

“These objects are compelling enough to say there’s some serious metal in the water,” Williamson said.

Brian Soenen, coordinator of the Iowa Department of Natural Resources’ IOWATER program, a volunteer effort to monitor Iowa’s water quality, said the material in the river generally comes from one of three sources.

First, in the 1960s and 1970s, he said, people would position large objects—including cars—along the river banks in an attempt to prevent erosion. In other cases, floodwater would carry nearby objects into the riverbed.

Some of the material, though, arrives via unscrupulous dumping along Iowa’s rivers.

Folks can click here and here for pdfs with more information on these sculptures.
Posted by Matthew