Jetsonorama And The Moving Planet 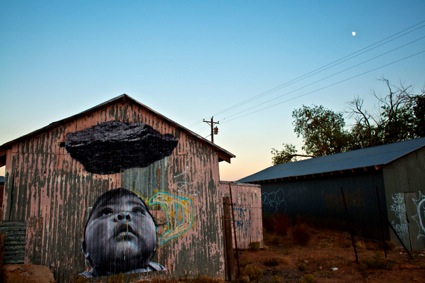 We are back today, after a few days away from the site to take care of arts and site-related tasks, with some exciting new work by Jetsonorama, an artist based in the Navajo Nation in Arizona (see our related articles below). Jetsonorama, working in collaboration with 350.org's global Moving Planet gathering last week, has just released a new series of wheat paste murals that express the cultural and environmental costs of the coal industry in the Navajo Nation. Here's the artist writing about the project, from his site:

i started getting ready for this project about 6 weeks ago. thanks goes to friend and co-worker rena yazzie and her brother who provided a big, beautiful lump of coal from the kayenta mine. thanks to josey and jameson for letting me photograph their adorable 5 month old daughter, j. c.

it's been an insightful period for me. if the navajo people and coal were to declare their relationship status on facebook, they'd have to chose the "it's complicated" option. i informally interviewed 16 co-workers and asked them to share with me the first thing that comes to mind when i say "coal." everyone i talked with was raised on the reservation. they all identified coal as a cheap source of fuel, especially for the elders. it's readily available to all tribal members. by way of comparison, a pick up truck full of wood costs $200.00. that same pick up truck loaded with coal would cost only $60.00 and the coal would burn longer. 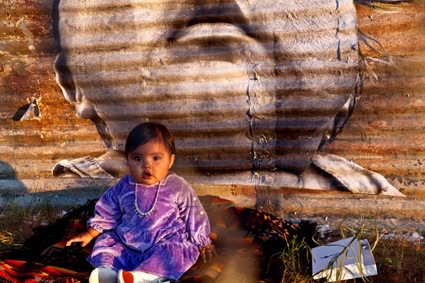 Jetsonorama continues, reporting that his community recognizes the clear effects of their use of coal in her homes (he cites many instances of respiratory illness) and also remains cognizant of the brute economic facts of the coal extraction industry--that the majority of the power (literal, figurative) and the profits are sent out from Navajo lands towards the metropolises of the West. This movement stands in the face of a series of undeniable statistics about the region, its size and its potential wealth, that suggests that the orb of coal floating over J.C.'s head is a remnant of many older structures of oppression:

the reservation is home to 170,000 people who live in an area that is 27,500 square miles. it's larger than 10 individual states within the u.s. over half of the population lives below the usa defined poverty line despite having land that is rich in coal, natural gas, uranium and water. the unemployment rate is 40%. mining operations on the reservation provide work for a small segment of the population who are able to realize a middle class lifestyle for their families. however, the cost to the families who burn coal in their homes and to the environment is great.

Jetsonorama's site features many more images from this project-- in a larger, high-resolution format. Folks can read more about his work on Brooklyn Street Art as well as The Huffington Post, both of which have reported on Jetsonorama's project with 350.org. Folks may also want to pay a visit to this organization, which was founded by writer Bill McKibben five years ago; 350.org has orchestrated a number of global actions and discussions that have engaged a range of people on the issues of climate change. 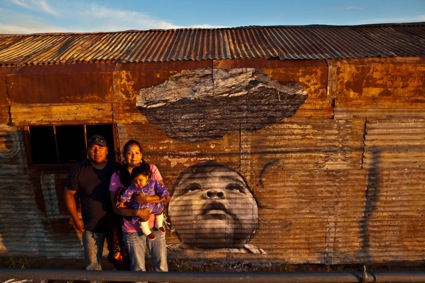 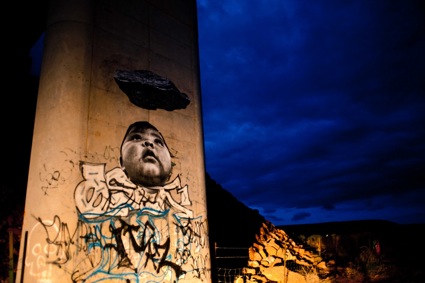