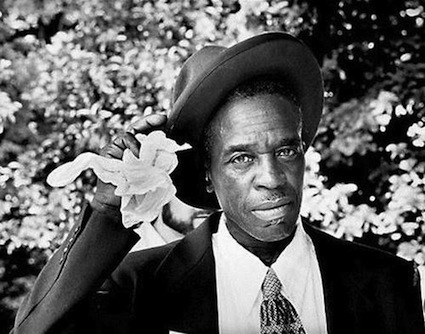 Here are stories we shared this week on our Arts and Culture Feed:

• Skip James would have turned 110 this week. To celebrate, the Alan Lomax Archive's Facebook page shared a series of live performances and rare photos, including this clip from the 1966 Newport Folk Festival. Listen to, and view, a wealth of material by Mr. James and thousands of other musicians at the digital archives of the Association For Cultural Equity.

• The Humanities Institute at UC-Davis this week published a feature on the work of The Art of Regional Change, an interdisciplinary project that, as they describe themselves, "brings together scholars, students, artists, and community groups to collaborate on media arts projects that strengthen communities, generate engaged scholarship and inform regional decision-making." We've written before about the work of ARC -- but this feature discusses their more recent Restore/Restory project based in rural Yolo County. Here is an excerpt:

This diverse array of people is co-creating a site-based audio tour and a series of media pieces curated on an interactive public history website. Thanks to a grant from the UC Humanities Research Network (UCHRI), this work will be showcased in a series of “twenty-first century Chautauquas” hosted this fall. jesikah maria ross borrows the term from the rural popular education movement of the late 1800s that centered on discussion of art, culture, and contemporary issues. ross believes that Restore/Restory invites the public to think about “big humanities questions around culture, justice, truth, diverse perspectives, beauty. It’s allowing us to take these questions and anchor t hem physically to a piece of land, and…have people dialogue about it.”

Two of these Chautauquas will take place in late October on site at the Cache Creek Nature Preserve. These events will debut the website and audio tours and will bring the public in direct contact with the storytellers on the land. For example, nature and culture walks will lead guests through the preserve as they hear the history of specific sites from different perspectives. A tour of the gravel bars might pair a geologist and a lifelong miner to share their differing expertise on the gravel in the creek. Another group may hear a tribal member talking about the tending and gathering gardens inside the preserve alongside an ecologist talking about the ecological habitat.


In 1918, not yet citizens of the U.S., Choctaw members of the U.S. American Expeditionary Forces were asked to use their native language as a powerful tool against the German Forces in World War I, setting a precedent for code talking as an effective military weapon and establishing them as America's original Code Talkers.

For further information, folks can visit the Choctaw Code Talkers Association, which hosts a wealth of information; please find the trailer for the documentary below:

• The Washington Post put together a glimpse into how the arts -- as practiced by local residents and formerly urban newcomers -- is transforming the town of Hannibal, Missouri. Of course, Hannibal is the hometown of Mark Twain, so there is a rich legacy of the arts in the region, but this influx of creative activity has also helped to bolster the local economy. Here's a selection from the article:


Twain still is the main attraction for the half-million tourists who visit Hannibal each year, but now they get a bonus: A growing number of artists, many of national and international repute.

“The downtown storefronts are filling up with artists,” said Gail Bryant, director of the Hannibal Convention and Visitors Bureau. “That’s certainly part of the draw.”

During the past decade dozens of artists ranging from painters to potters, weavers to photographers have come to Hannibal, attracted to the breathtaking river scenery, the charming — if often dilapidated — old homes, a welcoming community and a ready-made base of visitors. It also helps that Hannibal, smack-dab in the middle of the nation, is within a day’s drive of countless art shows and fairs crucial for making ends meet.

Lisa Higgins, of The Missouri Folk Arts Program, expanded on this piece through her comments in the Feed:


It's a culturally rich town. We just did a community scholars workshop with field trips there, especially within the African American community. There's more to Hannibal than Mark Twain, and then, there's Mark Twain. The Hannibal Arts Council is also a dynamic and thriving org.

• In "Freedom Gardens, The Seeds of Survival," Michael Tortorello of The New York Times produced an excellent feature on the history of the heirloom seeds and Juneteenth gardens within the southern African-American community. Agriculture holds a rich, though complicated place in this contemporary dialogue:


The broader truth is that gardening is a lost tradition in many African-American communities. The National Gardening Association doesn’t tally the number of black gardeners — nor, it would seem, does anyone else. The government survey that tracks farming demographics, the Census of Agriculture, offers mostly discouraging data about black farmers. In the last survey, African-American operators controlled only 33,000 of the nation’s 2.25 million farms — less than 1.5 percent.

• Lastly, The Smithsonian Folklife Festival shares news today of a musical conversation between Appalachia and Trinidad:


Ellie Mannette, considered the “Father of Modern Steel Drums,” has brought West Virginia University into the steel drumming tradition. In 1991 he was offered a guest semester staff position at West Virginia University, which turned into a permanent job within the music department. Here, Mannette continues to pass along his love for pan building and playing to interested students.

Originally from Trinidad, Mannette was born in 1927 and started playing steel drums in 1937 when he was eleven years old. The first band with which he played was called New Town Cavalry Tamboo Bamboo. He went on to perform with a number of other bands until he joined TASPO, or the Trinidad All Steel Percussion Orchestra, in 1951. After migrating to the U.S., he helped the U.S. Navy Band and then started an inner city children’s music program with a focus on steel drumming in 1967.

There is much more to explore on the groundbreaking work of Ellie Mannette online. Below we'll share a recent short-from documentary on Mr. Mannette's life and music: