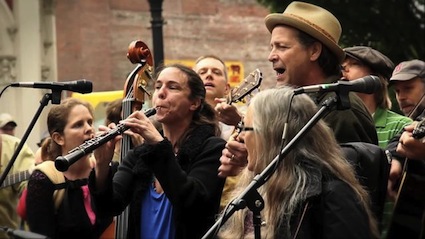 photograph from The Winding Stream


Last week a flash mob convened at the Portland, Oregon Saturday Market and sang the Carter Family classic "Will The Circle Be Unbroken."

These singers and musicians gathered to celebrate the work of the Carters, and also to raise awareness of The Winding Stream -- a documentary that charts the course of country music through its founding family and the lives of Johnny Cash and June Carter Cash. Director Beth Harrington is currently leading a Kickstarter campaign to help with the editing and post-production work on the film. There are only eight days remaining in her campaign, so readers who taken interest in our previous coverage of the film have an opportunity now to contribute to the telling of this story.

What's exciting about Ms. Harrington's project is how, with an arc that continues through Johnny Cash, we see the music of Clinch Mountain transcending rural/urban and traditional/contemporary boundaries -- offering the work of A.P, Sara, and Maybelle as a part of an inheritance accessible to all listeners, whether they live in Appalachia or New York City or London.

This quality is best demonstrated in The Winding Stream trailer, which is included below: