The Tree That Bursts Through The Silo 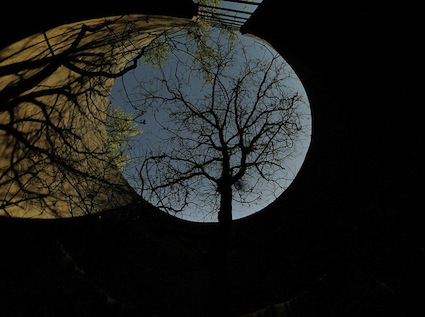 
Many thanks to María Arambula for sharing on our Arts and Culture Feed A.G. Sulzberger's latest rural dispatch for The New York Times, "Amid Rural Decay, Trees Take Root in Silos." The image of these trees bursting from disused farm structures unifies an arc of how the last century has dealt with rural place as an aesthetic ideal.

To begin, here's Mr. Sulzberger discussing this phenomenon across Kansas and Missouri:

The empty structures catch seeds, then protect fragile saplings from the prairie winds and reserve a window of sunlight overhead like a target. In time, without tending by human hands, the trees have grown so high that lush canopies of branches now rise from the structures and top them like leafy umbrellas.

Across a region laden with leaning, crumbling reminders of more vibrant days, some residents have found comfort in their unlikely profiles.

“It just struck me as, I don’t know, a symbol of something,” said Ken Wolf, who has spent many days of his retirement searching the area for what he calls, simply, silo trees, photographing dozens along the way. “I see it as a kind of passing.”

Mr. Wolf's photographs present these tree-silos are a kind of vernacular architecture, not consciously assembled structures -- though they suggest this aesthetic through neglect and abandonment. As the photographer surmises, we're in the presence of a symbol heavy with historical and cultural weight.

It's jarring, then, to consider the image of this tree just one hundred year's ago, in the poetry of William Butler Yeats. In "Upon A House Shaken By The Land Agitation," Yeats laments the passing of the Anglo-Irish Ascendency who even, before the Easter Rising, were seeing their large estates broken up into smaller holdings and dispersed to local farmers. Yeats's position on the matter would be akin to many modernists, who envisioned their art free from the demands of (or condescensions to) popular audiences; the Nobel laureate saw in the destruction of an estate's "big house" a metaphor for the loss of what he would call (in another poem featuring a tree-symbol): "custom and ceremony." After decades connecting rural folklore to national literature, Yeats displays the anxieties of his class and his cultural standing -- worrying if these same people, so often portrayed by him as the spirit of the nation, would really be careful stewards of the land and its culture. He laments what is lost by allowing a tree to flourish in the place of a symbol of high cultural wealth.

In Mr. Wolf's phtography we find a drastically different situation but, nonetheless, a structure in ruin and a landscape in transition. What is contested is what narrative we ascribe to the branches breaking free from the silo's concrete hold; is this a reclamation or a commentary on industrial agriculture, a scene of "rural decay" or something that transcends economics and cultural cliches? Is this a preface or a postscript?


Upon A House Shaken By The Land Agitation

How should the world be luckier if this house,
Where passion and precision have been one
Time out of mind, became too ruinous
To breed the lidless eye that loves the sun?
And the sweet laughing eagle thoughts that grow
Where wings have memory of wings, and all
That comes of the best knit to the best?
Although  Mean roof-trees were the sturdier for its fall,
How should their luck run high enough to reach
The gifts that govern men, and after these
To gradual Time’s last gift, a written speech
Wrought of high laughter, loveliness and ease? 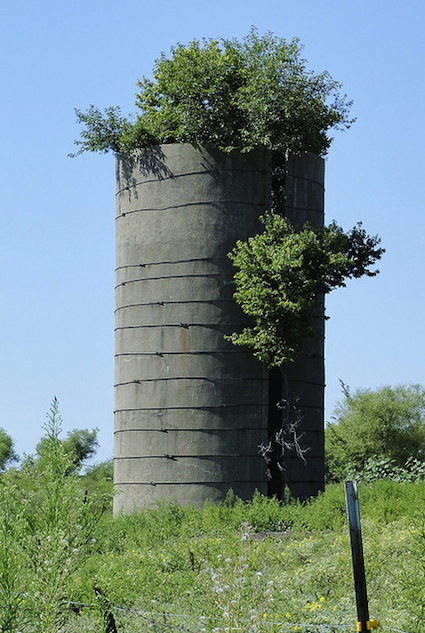