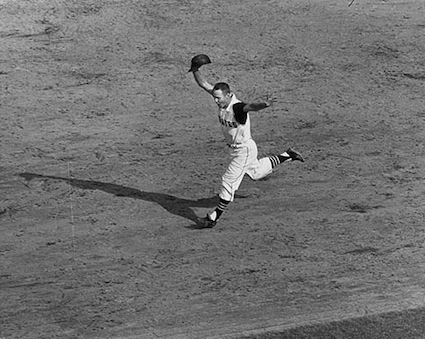 Bill Mazeroski, after his home run to win the 1960 World Series: James Klingensmith

Today is Opening Day for Major League Baseball, that turning of a cultural season to match the Spring's turning of the fields.

Above we feature a legendary photograph of one of baseball's finest moments: Bill Mazeroski's walk-off home run in the 1960 World Series, the year that the Pittsburgh Pirates improbably defeated the mighty New York Yankees. Born in Rush Run, Ohio, this All Star second-basemen and Hall of Famer has continued to make important contributions to his home region of the Ohio Valley long after he stepped off the field.

This iconic photograph was taken by Pittsburgh Post-Gazette James Klingensmith, who passed away last summer.

Below please find one of our country's Poet Laureates, Donald Hall, discussing Opening Day at Fenway Park -- alongside an equally, though differently, eloquent Red Sox blogger. Mr. Hall has lived for decades at Eagle Pond Farm in rural New Hampshire: