Alan Lomax And The Southern Journey 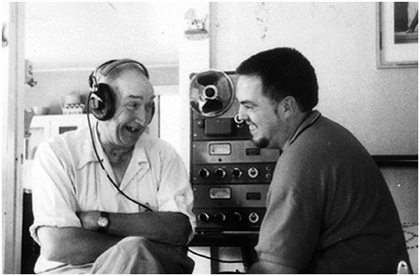 Some of the young folkniks, who dominated the New York scene, asserted that there was more folk music in Washington Square on Sunday afternoon than there was in all rural America. Apparently, it made them feel like heroes to believe that they were keeping a dying tradition alive. The idea that these nice young people, who were only just beginning to learn how to play and sing in good style, might replace the glories of the real thing, frankly horrified me. I resolved to prove them wrong.
- Alan Lomax


I imagine that, for many of our readers, Alan Lomax is a familiar face and a kindred spirit--and that folks may already have a close relationship to the Southern Journey recordings he conducted in 1959 and 1960. My story of coming to these records might be similar to many from my generation: at a crucial point as a young adult, when I was looking to encounter a broader range of musical expression, I discovered the Southern Journey CDs at my local library. While I had heard (and loved) Harry Smith's Anthology of American Folk Music, these recordings felt immediate, intimate and transporting. As Mr. Lomax would say above, once I heard "the glories of the real thing," nothing about my attitude towards music, art, or even community, was quite the same. And, again, I'm sure I'm not alone on that count.
Here's John Szwed, from his recent well-reviewed biography of Alan Lomax, on the recording trip:

Alan's work made it possible to grasp something of the history of American vernacular music, especially since the few writers who had attempted to approach it had neither the sheet music nor the recordings on which to build such a history. The rough and powerful origins of white American Protestant music were audible on these recordings, some of which still had traces of eighteenth-century elements. You could hear the mutual influence of black music and white. You could discover instruments and musical techniques derived from Africa, such as gourd banjos, quills, homemade drums, and polyrhythmic clapping, and perhaps understand the influences on jazz and rock and roll; or just experience how witty and complex children's songs and games could be.

Selections from Alan Lomax's Southern Journey recordings were recently remastered in a partnership with The Alan Lomax Archives at The Association For Cultural Equity and Mississippi Records, a label operating out of Portland, Oregon that exclusively releases its work (a stunning catalog of folk, blues, gospel, and international music reissues) on LP, and occasionally on cassette. These 5 LPs sound amazing, a true testament to the advancements in remastering technology since the previous Rounder CDs. (Vinyl lovers, act fast. These LPs are close to being out of stock.)
At the close of 2010, these Southern Journey remasters were also made available for download at a very reasonable price. They stand as the first releases from Global Jukebox, an independent label which will offer material from the Lomax archives to listeners in both LP and download format. This effort is led by Nathan Salsburg, an archivist and editor at the ACE who has also curated some outstanding projects on his Twos & Fews imprint and shared a wide range of vernacular music on his popular Root Hog Or Die internet radio show.
Mr. Salsburg's lively and informative notes on these performances are available for each recording at the Global Jukebox/Southern Journey site. There's also a generous selection of photographs from these recording dates, and they range from the informal (see above) to the downright heartbreaking photos of inmates with their visiting children at Parchman Farm Penitentiary. Here's Mr. Salsburg, writing in his Root Hog Or Die blog, about the process and prospects of putting together this series:

When sequencing them, I tried my best to ignore the rather sizeable catalog in which performances from the Southern Journey had been previously reissued – on Atlantic, Prestige, New World, and Rounder Records – and approach the 70-odd hours of recordings as if they were virgin territory. A few previously unissued items were included, as were a number of oft-anthologized pieces that were just too good to leave out of a reissue ([E.C.] Ball’s “Tribulations” and Fred McDowell’s “Gravel Road Blues,” among them). A brand new job was performed by Timothy Stollenwerk of Portland’s Stereophonic mastering studio. Working from our digital archival masters made 2000–2003, he did a shockingly great job of teasing out dimensions of the performances that have elided previous attempts.
.....
Lomax’s Southern Journey wasn’t the first recording trip south (although it was the first to be done in stereo), nor was it the last. It gave us the best recordings ever made, sonically speaking, of the Parchman work song repertoire, although earlier, mono performances were arguably stronger. Lomax did wonders with the Georgia Sea Island singers – they were made for stereo – but still couldn’t quite wrangle a good grasp on a Sacred Harp convention with just two mics (although they were the most successful shape-note recordings made theretofore). Since 1960 nearly every genre and region represented herein has been covered more deeply (some would surely argue more sensitively) by recording trips, doctoral theses, public-sector fieldwork. But none of this minimizes the transcendent beauty and humanity of so much of the Southern Journey, and its enduring, revelatory effect on fifty years of listeners. May it be received with wonder and joy for and by many more.

From my own perspective, having enjoyed these remastered releases while writing on the notion of "rural modernism," I'm left with the sense that Mr. Lomax's journey might be one of our culture's best analogs to that monumental twentieth-century odyssey: James Joyce's Ulysses. I'd never make that comparison lightly, but the range of emotion and experience we see across these songs is just the stuff from which Joyce made his modernist masterpiece, a novel about an Irish city teeming with an Irish rural diaspora. And, like Ulysses, we owe it to ourselves to return to this material, again and again, throughout our lives.
Below I'll offer two videos from the new Southern Journey remasters found on the Alan Lomax Archive YouTube Channel, with the accompanying text from Mr. Salsburg's liner notes:
Lomax's "Southern Journey" field recording trip ended in October of 1959, but by April of the next year Alan was back recording in the South, this time in the capacity of music supervisor to the Colonial Williamsburg Foundation's film, Music of Williamsburg. The aim was to recreate the sound of African American music as it might have been heard in Colonial Williamsburg, and, according to a strikingly progressive 1962 press release from the Foundation, "to portray the important contributions of the Negro race to the nation's heritage." Lomax assembled a novel cast, comprised of many musicians he'd recorded several months earlier, and drawn from disparate locales. Ed Young came north from Como, Mississippi, to provide the necessary fife-blowing. Hobart Smith traveled east from Saltville, Virginia, in the Blue Ridge Mountains, with his four-string banjo and a clawhammer technique learned, in part, from an African American. Nat Rahmings, a Bahamian drummer and drum-maker, was brought in from Miami. And the Georgia Sea Island Singers were the vocal group at the ensemble's core. After filming was completed, Lomax wrote, the "musicians stayed on for what turned out to be a day of extraordinary music-making and musical cross-fertilization." Alan had turned up this tune years before, having gone looking for the oldest published black dance songs in Virginia----its references to the drinking gourd evince its slavery-time origin----and he taught it to the group. "I cannot swear to the authenticity of this reconstructed material," Lomax continued. "But the musically conservative Sea Island singers gave it their enthusiastic approval." The Foundation approved of it too, and featured it in the film.

When Lomax visited him in 1959, Raymond Spencer Moore was farming tobacco on his small acreage in Southwestern Virginia. "A family man," Alan wrote of him later. "Hospitable, slow-spoken, and as genuine as a rail fence." Although Lomax only made four recordings of him, Spencer has been said to know over five hundred songs----including blues, hokum, minstrel material, play-party ditties, contemporary country compositions, and a few topical pieces of his own devising. He also had quite a repertoire of ballads of recent vintage and regional application (such as "The Lawson Family Murders"), as well as this Americanized variant of a widely sung (and oft-parodied) item, first published in Dublin at least as early as 1806. As a child in Laurel Bloomery, Tennessee, Spencer was bounced on the knee of legendary fiddler G.B. Grayson, who would stop by to visit with Spencer's father, James Moore, himself a fiddler and banjo player. In the late '30s, Spence and his brother Joe organized a close-harmony duet in the style of the Blue Sky Boys and the Delmore Brothers, appearing at dances and tent shows as far away as New York and Pennsylvania, and on one occasion sharing the stage with the Carter Family. After service in World War II, Spencer and his wife settled near Chilhowie, where he continued to farm and play music with his brother, friends, and neighbors for many decades, only recently (mid-2009) moving into a nursing home at the age of ninety.