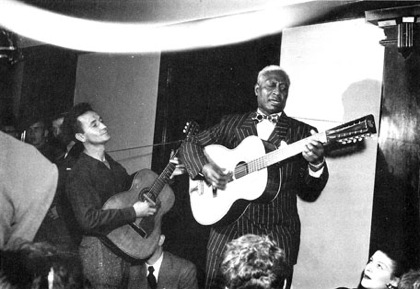 Woody Guthrie with Leadbelly, Chicago, 1941
Rachel Reynolds Luster has reminded us that this week would have marked Woody Guthrie's 99th Birthday. She's suggesting "All You Fascists Bound To Lose" for some Sunday listening.

Also, thanks to the wonders of YouTube, we have Pete Seeger's 1947 film To Hear Your Banjo Play, which features Woody Guthrie, Sonny Terry and Brownie McGhee. Mr. Seeger's commentary reminds us of how migrant agriculutral labor not only built this country, but produced a culture and an arts that we claim as distinctively American:

In thinking about the folks who labored in rural places, and who we too-often forget when we retell the story of America's rise to prominence, I'll also include a favorite of my own, from the wonderful Asch Recordings. Maybe it's time for a few new verses.
Posted by Matthew