On The 4th: Where Soldiers Come From 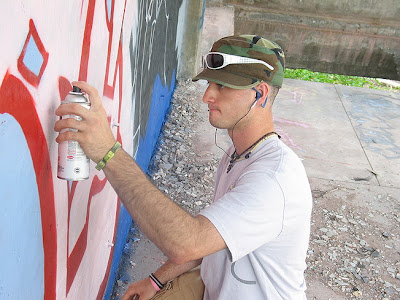 Dominic Fredianelli at work on a mural; Where Soldiers Come From
U.S. Secretary of Agriculture Tom Vilsack often quotes this statistic: rural America comprises 20% of the nation's population and 40% of the country's armed forces. As we celebrate the Fourth of July today, that figure stands as a concise statement for what many folks already know--that rural soldiers serve their country at a disproportionate level in comparison to their suburban and urban colleagues, yet they often receive less than adequate care when they return home.
This issue was reinforced last week at The National Rural Assembly, in a special afternoon session. Folks who have been reading this site for a while will remember our previous coverage of Where Soldiers Come From, a documentary film by Heather Courtney that follows a group of friends from Michigan's Upper Peninsula as they enlist in the National Guard and later travel to the frontlines in Afghanistan.  Both Ms. Courtney and Dominic Fredianelli, one of the subjects of the film (and an excellent graffitti artist), were present at the Assembly to present a few clips and to answer questions.
Here's Bill Bishop covering the event in The Daily Yonder:

But this is not a war film. It is a narrative about rural America, Courtney said. “I’ve always felt that rural America is not portrayed very authentically in television or film. That was my main motivation. It started as a coming of age film and [one about] the place they’re from. At its heart it is a film about rural America.”

Much of the film focuses on the difficulties Dom and his friends faced when they returned home to their small town of Hancock, not the least of which is access to Veterans Affairs (VA) services. “Our big hospital is about two hours away,” said Fredianelli, who was present at this afternoon’s partial film screening. “Some people are still waiting for their compensation. If you don’t have a car, there’s only like one shuttle per week down to the big hospital.”

I had the pleasure of speaking with Dominic Fredianelli and Heather Courtney after the screening. I'm looking forward to sharing more about Mr. Fredianelli's graffitti art (and also the presence of this art form across rural America) and also to returning to the documentary when, this fall, it travels across rural Michigan. Ms. Courtney is very interested in engaging rural communities with this documentary; as the Q&A following the screening demonstrated, this film opens up a number of avenues through which to discuss the challenges facing rural veterans. What's most promising: the story of these men, combined with Ms. Courtney's gifts as a filmmaker, can move an audience to work through solutions to these challenges.
Below I'll include the trailer for Where Soldiers Come From, followed by an interview with Ms. Courtney from PBS NewsHour. The film will be broadcast on the PBS POV series this November.