From Brooklyn to Clinch Mountain: The Carter Family Project 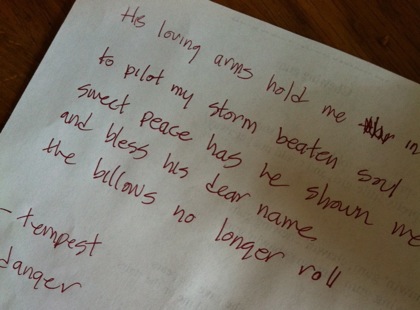 The couple's crib sheet to "Anchored in Love"
We have to give a huge thank you to Beth Harrington, via her forthcoming film The Winding Stream: The Carters, The Cashes and the Course of Country Music, for encouraging us to discover The Carter Family Project:

Fran Leadon and Leigh Anderson of Brooklyn, NY attempt to record every single song that the Carter Family ever cut.
Just like the original recordings, these are lo-fi and low-budget. We are using a H2 Zoom recorder propped on a chair in our living room. Fran plays a homemade D-18 guitar and sometimes a 1959 Martin 0-18. Leigh plays an early 1950s Epiphone upright bass.
We grew up listening to the Carter Family. The rules for this project are simple: record the songs in chronological sequence, beginning with the first 1927 Bristol sessions recordings, don't worry too much about flubs, and get everything recorded while the baby is napping.

Mr. Leadon and Ms. Anderson maintain a simple and elegant tumblr page for the project, which offers up their rendition of a new Carter Family song just about every day. Ms. Anderson writes that she grew up listening to the Carter Family in West Virginia (Mr. Leadon, in Florida); from their home in Brooklyn, this gives an intimate feel to the urban-rural dynamic of this wonderful DIY project.
While the group sometimes offers up the song alone, with a few basic liner notes, other posts contain the some historical and contemporary context for the people and places of these songs. For instance, perusing the archive will reveal a picture of John Hardy on the scaffolds in Wheeling, West Virginia; I've loved this song, in all its renditions, for years yet never had seen a photographic record of the event. Combined with the fact that I also did not know that John Hardy met his maker in Wheeling (my family's farm is a few miles across the river in Ohio), this post was a revelation.
What also interests me about this project is its process of recording, which (instead of musicians sitting in a studio) seems much closer to the way in which Sara, A.P., and Maybelle would have first encountered these songs. While Brooklyn is a long way from Clinch Mountain, there's a sense of family and community to these new recordings which can ease that geographical distance through a common musical experience. We might look to their first post (on June 19th) for evidence of this:

Today we finally began something we’d talked about for the last year: recording every single Carter Family song that the original lineup (Sara, Maybelle, A.P.) ever recorded, beginning with their legendary Bristol sessions in 1927.  We haven’t had a chance to start because our 14-month old, Ben, takes a lot of time and we’ve been working on writing projects and teaching.  But now it’s summer, and so after lunch we decided to try to “cut” a few numbers while Ben was taking his afternoon nap.

As usual, Ben’s timing was not lined up perfectly with ours, and he woke up from his nap right when we got tuned up and ready to go.  So we recorded “Bury Me Under the Weeping Willow” with him still in the crib.  Then we got him up, changed his diaper, gave him some milk, and plopped him into his playpen, about six feet away from the mic.