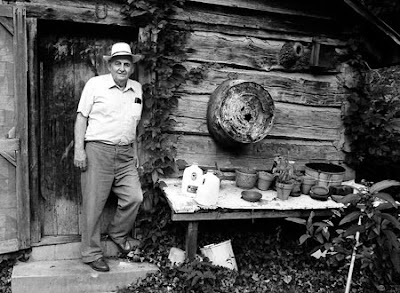 "James Still at his cabin on Dead Mare Branch, on his 80th birthday, July 16, 1986;" Tom Eblen
Today in the Rural Poetry Series we turn to the work of James Still (1906-2001), a poet born in Alabama but at home in Knott County, Kentucky. From there,  Mr. Still composed a series of novels, short stories and poems that dramatically altered (and advocated for) Applachian literature. His fiction masterpiece, River of Earth (1940), dramatizes the pull between rootedness and mobility--lessons learned first-hand. Mr. Still joined the struggle for miners' rights in the 1930's while also completing graduate degrees at Vanderbilt and the University of Illinois; he worked in the Civil Service, in the cotton fields, and even as a bible salesman. His range of experiences were capped as a Sergeant in World War II, stationed in Egypt.
From these wanderings, Mr. Still's most fortuitous connection came with his friendship to Don West, an activist, educator, founder of the Appalachian South Folklife Center--and an excellent poet himself. Mr. West suggested Knott County, which led to James Still's work in the library and local schools, and his eventual connections with The Hindman Settlement School and its Appalachian Writers Workshop.
Many years ago as a young poet, I had the chance to attend the Workshop at Hindman. Though perhaps not explicitly referred to as such, it was clear we all were in "James Still Country." His whereabouts were the subject of anxious and excited updates, and the reverence in the packed auditorium for his reading was palpable and deeply moving, a foundational example for me of how the arts can transform local culture.
While a follow-up article will elaborate upon the Hindman Settlement School and the Appalachian Writers Workshop, I'd like to share a poem of Mr. Still's that is inseparably linked to his home place.

Heritage
I shall not leave these prisoning hills
Though they topple their barren heads to level earth
And the forests slide uprooted out of the sky.
Though the waters of Troublesome, of Trace Fork,
Of Sand Lick rise in a single body to glean the valleys,
To drown lush pennyroyal, to unravel rail fences;
Though the sun-ball breaks the ridges into dust
And burns its strength into the blistered rock
I cannot leave. I cannot go away.
Being of these hills, being one with the fox
Stealing into the shadows, one with the new-born foal,
The lumbering ox drawing green beech logs to mill,
One with the destined feet of man climbing and descending,
And one with death rising to bloom again, I cannot go.
Being of these hills I cannot pass beyond.

While this poem can be found in From the Mountain to the Valley: New and Selected Poems, the United States of Poetry series also offers this video of "Heritage" shot among the grounds surrounding his cabin:

This season has been an exciting one for Mr. Still's many readers. To commemorate the ten-year anniversary of his passing, The Hindman Settlement School recently hosted A Celebration of James Still featuring talks, readings, musical performances and the exciting release of Mr. Still's final novel: Chinaberry. The novel is edited by one of Appalachia's finest contemporary writers, Silas House, and is now available from The University of Kentucky Press.
Here's an excerpt from Tom Eblen's excellent article in The Lexington Herald-Leader on the book's release:

Unlike his other writing, Chinaberry is not set in the Eastern Kentucky mountains. It takes place in the wide-open cotton and cattle land of rural Texas nearly a century ago, and in Still's native Alabama.

Chinaberry is about the epic journey of an unnamed boy of 13, who often seems much younger. He leaves Alabama with family friends for a summer of picking cotton in Texas. During the next three months, his life is transformed.

"I think it's a love story on so many levels," House said. "It's a love story between the author and childhood, between a person and a place. I think there's a palpable love for Texas in the book, and for a way of life that's gone forever."

At the heart of the story is the relationship that develops between the boy and the Chinaberry ranch's owner, Anson Winters, and his second wife, Lurie. Anson virtually adopts the boy, treating him as a replacement for the young, handicapped son whose death he still grieves.

"What's so brilliant about the book is that (Still) doesn't make any judgments; it's a psychological thriller in a way," said House.

The celebration at Hindman was also punctuated by the re-release of Heritage, a collaboration between James Still and dulcimer/banjo player Randy Wilson. Appalshop and June Appal Recordings have made this material available for the first time on CD, with more information available here.

Folks should also peruse the Fall 2010 James Still special issue of Appalachian Heritage, a journal closely associated with Mr. Still and also with current and emerging voices in Appalachian literature.
Posted by Matthew