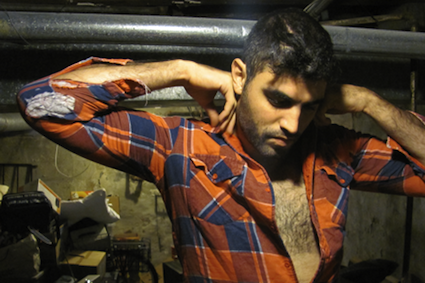 If folks are familiar with the rich, hallowed ground of country music that deals with trucking and the open road, then these new contributions by Daughn Gibson will come as a surprise.

His first record, All Hell, has been available for a few weeks, with interest in Gibson's unique musical-collages steadily gathering steam in the music press. Here's Larry Fitzmaurice, writing in his Pitchfork feature on the artist:

There are moments of genuine noise and terror on singer-songwriter Daughn Gibson's debut solo LP, All Hell, but not of the devil's-horns kind. Instead, the 31-year-old Carlisle, Penn., resident fashions ghostly, haunting country-ish ballads out of Christian gospel samples and looping audio software while his rich baritone narrates small-town tragedy.

Gibson's affinity for country music-- as well as the genre's cherished storytelling tradition-- began when he started driving trucks for a living nearly a decade ago. "I started listening to country when there was nothing else to listen to on the radio when I was driving," he says. "I started liking the stories, no matter how absurd they sounded. I liked that they were portrayals of people, or scenarios, or nostalgia." To this day, he's stillworking in the trucking industry, as an HR representative.

I have been recently been reading, and re-reading, Collage Culture, a collaboration between poet Mandy Kahn, filmmaker/curator Aaron Rose, and designer Brian Roettinger. Across these essays, they give an impassioned argument for artists, writers, and musicians to move beyond collage as an end-in-itself, and they offer a thoughtful critique of how an admixture of styles, references, and cultural debris liberally scattered together (like a Google image search) negates all the history, ideology, and human experience contained in each discrete element of a collage. Though this publication emanates from Los Angeles, and is entirely concerned with urban art forms, I sense that its thesis would be enthusiastically received by many of our readers and collaborators.

No genre is more complicit in "collage culture" than electronic music, which brings us back to Daughn Gibson. The compelling, catchy, and, at times, unsettling effects of the songs on All Hell seem to transcend the pitfalls of Collage Culture and sample-based music. Is this because Gibson is working with country music material that emerges from his lived, placed, experience? Does the style and texture of these songs also emanate a kind of spatial sense of the open road, the rural interstates of Pennsylvania, the quality of constantly traveling between points on a map?

It may be a challenge to not to contextualize, or even romanticize, some elements of this music's creation. Please feel welcome to offer your own takes of this on our Arts and Culture Feed.

Included below is another song from All Hell, "Tiffany Lou," followed by a video trailer for Collage Culture directed by Aaron Rose: