The Snakes and Southern Vernacular of Harry Crews 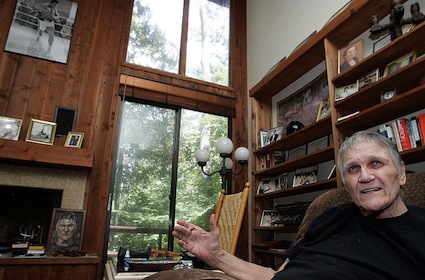 She felt the snake between her breasts, felt him there, and loved him there, coiled, the deep tumescent S held rigid, ready to strike. She loved the way the snake looked sewn onto her V-neck letter sweater, his hard diamondback pattern shining in the sun. It was unseasonably hot, almost sixty degrees, for early November in Mystic, Georgia, and she could smell the light musk of her own sweat. She liked the sweat, liked the way it felt, slick as oil, in all the joints of her body, her bones, in the firm sliding muscles, tensed and locked now, ready to spring — to strike — when the band behind her fired up the school song: “Fight On Deadly Rattlers of Old Mystic High."

The South lost two preeminent artists last week: Earl Scruggs and Harry Crews. While our Arts and Culture Feed covered many of the remembrances and documentary footage of Mr. Scruggs, we'd like to offer further gateways into discovering the solitary and one-of-a-kind fiction of Harry Crews. To begin, there's the excerpt above -- the opening paragraph to his critically-acclaimed 1976 novel A Feast Of Snakes.

Dwight Garner, writing in the The New York Times, shares this quote about how Crews dealt with the poverty of his rural place, qualities that place him among that other clear-eyed commentator of the rural poor, Joe Bageant:

“I was so humiliated by the fact that I was from the edge of the Okefenokee Swamp in the worst hookworm and rickets part of Georgia I could not bear to think of it … Everything I had written had been out of a fear and loathing for what I was and who I was. It was all out of an effort to pretend otherwise.”

Pretend is a loaded word in Crews' fiction, which finds a powerful and often uncomfortable margin between brute realism and otherworldly imagination. Searching for the Wrong-Eyed Jesus, a sort of lyrical documentary on Southern culture also considers this quality. This clip features music from David Eugene Edwards of 16 Horsepower and Wovenhand:


By far, however, the most comprehensive and moving remembrance of Harry Crews has come from Maud Newton, a writer, critic, and former student of Harry Crews at the University of Florida. Her piece in The Awl reveals many sides to Crews beyond the work or the official obituaries, including this excerpt from his A Childhood: The Biography of a Place:

One of my favorite places to be was in the corner of the room where the ladies were quilting. God, I loved the click of needles on thimbles, a sound that will always make me think of stories. When I was a boy, stories were conversation and conversation was stories. For me it was a time of magic.

It was always the women who scared me. The stories that women told and that men told were full of violence, sickness, and death. But it was the women whose stories were unrelieved by humor and filled with apocalyptic vision. No matter how awful the stories were that the men told they were always funny. The men's stories were stories of character, rather than of circumstance, and they always knew the people the stories were about. But women would repeat stories about folks they did not know and had never seen, and consequently, without character counting for anything, the stories were as stark and cold as legend or myth.