A Louvre in the Ozarks: The Life And Art Of Tim West 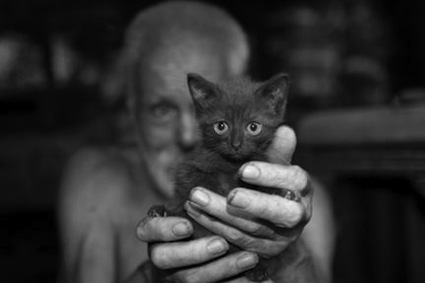 Bare feet and bicycle wheels transported artist Tim West (1938-2012) for most of his seventy-five years through the mountain roads and highways of Northwest Arkansas. The regionally celebrated yet reclusive West died April 2 just weeks before he was to be featured in his second major exhibition at Little Rock’s M2 Gallery.

Tim West was born in Santa Fe, New Mexico in 1938, but he was very soon brought to live in the Ozark Mountains near the town of Winslow where his parents had long dreamed of homesteading and writing. His father Don West did write a fine novel Broadside to the Sun based on the family’s backwoods life which was published in 1946 by W.W. Norton. Those barefoot years were idyllic for young Tim, but interrupted by a move 22 miles north to the university town of Fayetteville where his father collected fiddle tunes for the Arkansas Folklore Society and his mother Muriel West earned an MA in English in 1952 with her own fine novel Under Every Green Tree. The Wests soon separated, Don relocating to the artist’s colony of Eureka Springs and Muriel taking a job at Southern Illinois University –Carbondale in 1958 when young Tim went there to study visual arts. 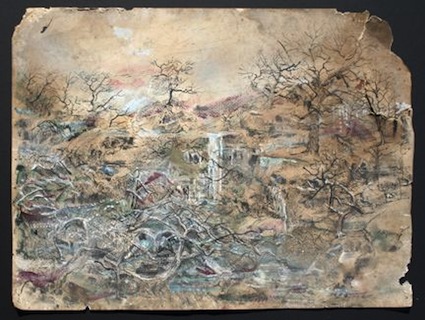 Tim West proved both an extraordinary artist and a troublesome young man. At age eighteen he mailed off a print and had it accepted into the permanent collection of the Museum of Modern Art, and he would soon send a pair of works off to the Louvre in Paris where they would also be accepted. His former instructors and classmates remembered both his ingenious talent – including a wall in his home constructed of bicycle wheels—but also his brushes with the law for everything from attempted robbery to skinnydipping. He earned his MFA there in 1962 and stayed on another eight years, drinking, making art, making mischief, and riding his bicycle about town, before he decided he’d had enough of Carbondale and headed back to the Ozarks in 1970.

For most of the next forty years, he remained a barefoot recluse on the old family place, scrounging for materials, making his art, periodically riding his bicycle into town. More sober if not more conventional, he became a part of the spectral fabric of the passing years, not often visually distinguished from the many latter-day back-to-the-landers.

That is, until one summer day in 2006 when Fayetteville photographer Diana Michelle Hausam was driving the backroads and came upon a fence constructed of deconstructed bicycles. She left a note asking if she could photograph there and in a few days received a telephone call from Tim West. He invited her down, instructing her to honk her horn three times and, as in a fairytale, he would appear. The two became good friends and she spent several months photographing the gray and leathery West, his work, and his environment. 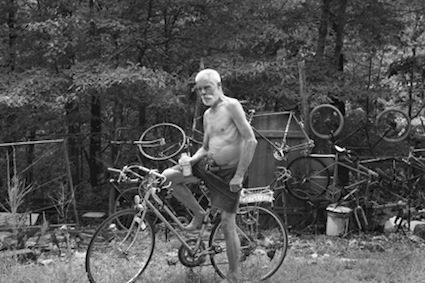 Here I Am; Diana Michelle Hausam 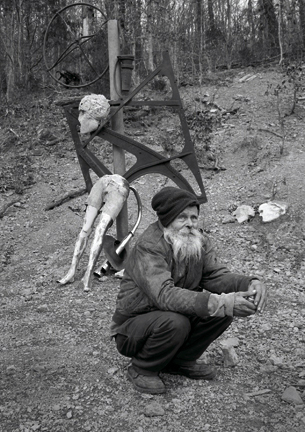 With her partner Greg Nelson, Hausuam began work on a documentary film about the artist entitled Westland and approached the M2 Gallery in Little Rock about an exhibition featuring West’s  paintings and sculptures and her haunting photographs of him. The exhibition was a resounding success bringing West much attention for his work, sales, and a platform for his thoughts and observations. In 2011 he was voted one of three top artists in the state by the readers of Arkansas Times. A Facebook page was created devoted to his work with images, old clippings, and reminiscences from both old friends and those who merely saw him along the road. His alma mater ran an article about him in their house publication. A Kickstarter campaign was launched to reshoot and expand Westland. One of his works, a rather disturbing image, was selected in January of this year for the prestigious Delta Exhibition at the Arkansas Arts Center, and an expanded version of his solo exhibit was set to open next month at the M2 Gallery.


Perhaps such townish celebrity proved too much for the old backwoods trickster, or perhaps his body simply gave out. Either way, he slipped away from this life the day after April Fool’s leaving us a passel of paintings, some enigmatic sculptures, and a spectral, transporting legacy.

Michael Luster is the Director of the Arkansas Folklife Program, a position affiliated with Arkansas State University and providing services to the Arkansas Department of Heritage, and he is also host of a weekly radio program, Hand Crank Radio.
Posted by Matthew