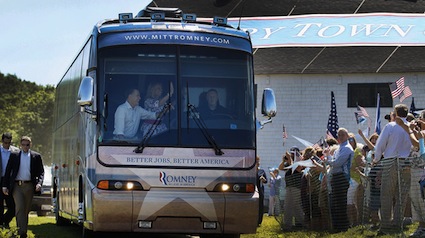 
Thanks to Matthew Glassman of Double Edge Theatre for sharing news of this Ari Shapiro's NPR piece on the presidential campaigns that are moving through his region of New England.

The Rural America Election Cycle is in full swing, that period where regions of the country traditionally given a backseat by policymakers and the news media become the staging area for patriotic and pastoral demonstrations. In this perennial moment of national yearning and uncertainty, both political parties accomplish turns of phrase like this recent articulation by Mitt Romney, reported by NPR:

"In the days ahead, we'll be traveling on what are often called the backroads of America," he said. "But I think our tour is going to take us along what I'll call the backbone of America."

Regardless of the rhetoric, rural Americans will cast the decisive votes in this fall's election, a point Mr. Shapiro conveys with clarity. Here's a selection from the transcript, which includes a framing perspective on the race by Dee Davis, President of The Center for Rural Strategies:

Romney and President Obama are both, let's be honest, city slickers. That's a big change for the American presidency, says Dee Davis, president of the Center for Rural Strategies.

"If it's [Ronald] Reagan on a horse or [Bill] Clinton, the man from Hope [Ark.], there's always been this kind of visual narrative or this story that to be president you had to be able to handle the wilderness, be comfortable outside of the city. It's just part of the lore," he says.

You're not likely to see Romney or Obama in a cowboy hat very often. But both men are trying to appeal to the folks who live in small towns, traditionally Republican strongholds.