Contexts: How The Magnet Changed A Village 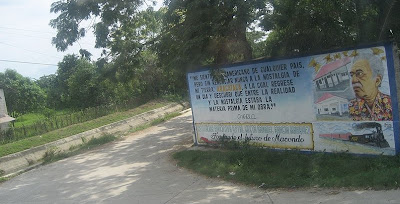 a mural outside Aracataca, Colombia, the hometown of Gabriel García Márquez


Many year later, as he faced the firing squad, Colonel Aureliano Buendía was to remember that distant afternoon when his father took him to discover ice. At that time Macondo was a village of twenty adobe houses, built on the bank of a river of clear water that ran along a bed of polished stones, which were white and enormous, like prehistoric eggs. The world was so recent that many things lacked names, and in order to indicate them it was necessary to point. Every year during the month of March a family of ragged gypsies would set up their tents near the village, and with a great uproar of pipes and kettledrums they would display their new inventions. First they brought the magnet. A heavy gypsy with an untamed beard and sparrow hands, who introduced himself as Melquíades, put on a bold public demonstration of what he himself called the eighth wonder of the learned alchemists of Macedonia. He went from house to house dragging two metal ingots and everybody was amazed to see pots, pans, tongs, and braziers tumble down from their places and beams creak from the desperation of nails and screws trying to emerge, and even objects that had been lost for a long time appeared from where they had been searched for most and went dragging along in turbulent confusion behind Melquíades magical irons. "Things have a life of their own," the gypsy proclaimed with a harsh accent. "It's simply a matter of waking up their souls." Jose Arcadio Buendia, whose unbridled imagination always went beyond the genius of nature and even beyond miracles and magic, thought that it would be possible to make use of that useless invention to extract gold from the bowels of the earth. Melquíades, who was an honest man, warned him: "It won't work for that." But José Arcadio Buendia at that time did not believe in the honesty of gypsies, so he traded his mule and a pair of goats for the two magnetized ingots. Ursula Iguarán, his wife, who relied on those animals to increase their poor domestic holdings, was unable to dissuade him. "Very soon we'll have gold enough and more to pave the floors of the house," her husband replied. For several months he worked hard to demonstrate the truth of his idea. He explored every inch of the region, even the riverbed, dragging the two iron ingots along and reciting Melquíades incantation aloud. The only thing he succeeded in doing was to unearth a suit of fifteenth-century armor which had all of its pieces soldered together with rust and inside of which there was the hollow resonance of an enormous stone-filled gourd. When José Arcadio Buendia and the four men of his expedition managed to take the armor apart, they found inside a calcified skeleton with a copper locket containing a woman's hair around its neck.


This is the first paragraph of Gabriel García Márquez's  Cien años de soledad (One Hundred Years of Solitude), a book no doubt familiar to many of our readers. While it's one of the twentieth century's finest works of literary art, it also tells a grand Genesis-like story of rural place: how it deals with cultural and intellectual change, how it manages the conflicted magnet-like pull between insularity and exchange with an increasingly modern, urbanized, and technologically advanced world.

The novel's Macondo is inspired by Mr. Márquez's hometown of Aracataca, Colombia. His coming-to-terms with this place and its colonial past gave birth to the rich emotional variety of his masterpiece. As he has said, and as muralists have recorded above, "I feel Latin American from whatever country, but I have never renounced the nostalgia of my homeland: Aracataca, to which I returned one day and discovered that between reality and nostalgia was the raw material for my work."

Artists from across the globe have responded to this imperative to find the "raw materials" in their local culture. Ghanian writer Nii Ayikwei Parkes once told The Guardian that One Hundred Years of Solitude "taught the west how to read a reality alternative to their own, which in turn opened the gates for other non-western writers like [himself] and other writers from Africa and Asia." I would argue that, amongst Mr. Marquez's lush, enveloping magic-realist narrative we also come to understand how a writer from rural Columbia may have taught the city "to read a reality alternative to their own." When reading these opening lines, we see a parable for the ways in which many rural communities, from Columbia to Appalachia to China, have embraced--or have been forced to embrace--"new inventions," often resulting in contradictory ends.

This is the first in a new series of articles we're calling "Contexts," pieces of art found from beyond the contemporary American experience that, though perhaps distant in time and geography, have important lessons to impart to our understanding of rural place and its arts and culture.

We would love to hear folks suggestions for this series--and also to hear what American works (or art, music, literature) you might think are "equal" or parallel to Mr. Máquez's masterpiece. Which  "opened the gates" for you? Also, if we're thinking about One Hundred Years of Solitude in these terms, what is the great Genesis-like story of rural America?

Thanks again for reading The Art of the Rural; I hope everyone enjoys this new series and finds it useful to their own conversations and visions of our shared rural space.
Posted by Matthew