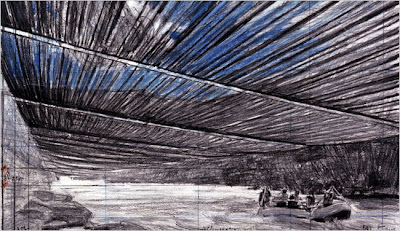 Sketch by Christo; New York Times
These three articles may be useful to consider together. Nature and agriculture, rural place and man-made artifice comingle here; combined, there's an ambiguous narrative at work, sketching a series of scenes from the ongoing discussion over how we figure the urban-rural interchange and what assets contemporary culture locates within rural place.
1. Christo's Colorado Project May Hinge on Sheep, by John Collins Rudolf, New York Times:

Nearly 20 years after the artist Christo and his wife, Jeanne-Claude, proposed draping a river canyon in southern Colorado in miles of translucent fabric, a federal thumbs up or down on the project may hinge on one factor above all others: the happiness of several hundred bighorn sheep.
Crucial to the federal government’s decision, expected in August or September, will be a final environmental impact statement on the $50 million installation, known as “Over the River,” that federal land managers plan to unveil in coming weeks.
Some wildlife experts worry that sheep could be displaced or even harmed if the fabric is unfurled over 5.9 miles of the Arkansas River between Salida and Cañon City. Last week the Colorado Wildlife Commission voted unanimously to urge federal officials to reject the proposal, citing in part its concerns about the bighorn, Colorado’s state animal. Continue reading here: 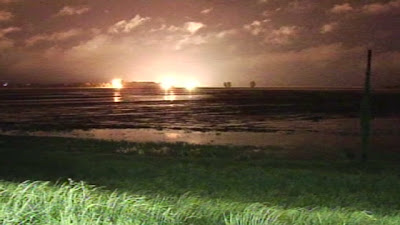 Breaching the levee on the Missouri side of the Mississippi River to lessen the impacts of the 2011 flood is more than a rural-urban conflict.
Flooding thousands of acres of farmland to lessen the pressures of raging Ohio River waters on cities such as Cairo, Illinois, and Paducah, Kentucky, was, at the moment, clearly about saving developed urban property at the expense of less developed and less populated rural areas.
But there’s a long history here, one that reveals big mistakes by leaders of the Conservation Movement during the twentieth century. They believed that wise use entailed controlling the nation’s rivers by building levies and draining wetlands to create farmland and promote other development.
The same principle applies to the massive irrigation projects that spurred farming and urban development in the western United States.
Sadly, in retrospect, these projects were called reclamation. People who claimed to want to preserve nature really sought to put our species above nature. They acted on misguided hubris that all of the gifts of the Earth were there for our use. Meanwhile, we made minor accommodations for plants and animals in the name of conservation. Continue reading here: 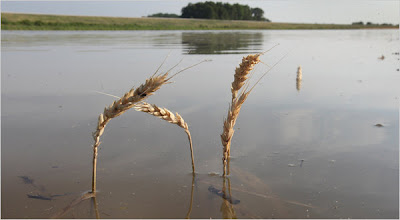 Like the very nature of water, the trickle-down effects of the historic flooding are leaving no corner untouched. Retail gasoline prices, already at two-year highs, and food prices could rise in the region because of supply disruptions. Tens of thousands of people are unemployed, shut out of jobs at establishments that are literally under water. State and local government coffers, strained because of the economic downturn, may lose many millions of dollars in revenue from tourism and taxes.
In about a dozen interviews, economists, farmers and industry officials said they expected hundreds of millions of dollars in damages including crop and infrastructure destruction in communities along the 740 miles of river that meanders from Memphis to New Orleans. But while the final bill has yet to be determined, the costs are already being felt.
In Yazoo County, Miss., John Phillips, a 61-year-old farmer, said thousands of acres of his cotton and corn crops had been destroyed. “In our area in the south delta, it is a widespread and very economically devastating disaster,” he said in a telephone interview, as he tried to run a pump. He said his annual revenue would be reduced by 40 percent because it was too late to replant. Continue reading here: