The Art of Regional Change In Rural California 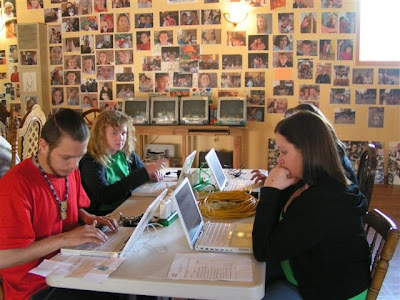 On site with Art of the Regional Change participants: Up From The Understory blog
Today we'd like to share some information on an program that's putting together work that's both inspirational and instructive for how we might envision the intersection of the academy, the arts and community sustainability: The Art of Regional Change.
Headquartered at the University of California-Davis campus and directed by jesikah maria ross, the ARC brings together scholars, artists, members the community (and a cohort of media-savvy undergraduates) to consider ways to revitalize local communities. As the student writers and media-producers work to tell the story of the place and its people, artists work to transmute those narratives into a lasting expression, and scholars observe the lessons learned from this shared effort--and transmit these strategies so that the process can be replicated elsewhere. It is a brilliant way to bring together a collection of perspectives that--though they all may be thinking and working toward the same larger goals--too often are skeptical or isolated from each other. Here's how the ARC describes this mission:

The Up From The Understory project immediately captured our attention:

Nestled among the rushing forks of the Mokulmne River and the pine covered Sierra foothills of Northeastern Calaveras County, the four towns of the Blue Mountain community were once rich in gold and timber. After a century of boom and bust resource extraction cycles, the close of the mining and timber industries left the region challenged by the loss of local jobs, boarded up businesses and difficulties attracting new development. While residents had started several community renewal initiatives, many of these projects were struggling to sustain themselves. After a decade revitalization efforts, the community needed a vehicle to better publicize local issues and bring concerned citizens together to work for change.

The "vehicle" The Art of Regional Change provided to Blue Mountain area residents centered on the power of storytelling, its ability to not only preserve local history and culture but to also provide a way for the community to re-envision its place and its future. Through this process of inter-generational storytelling, previously antagonistic groups within the community found common ground.
The youth who took part in this media project also produced a series of excellent short videos that feature the voices of folks from their community--and they can be viewed here.
jesikah maria ross has led a number of other exciting projects; one that many of our readers would also find valuable would be Farewell to a Rancher, an audio piece originally broadcast on Weekend America. Here, 85 year-old Sierra Nevada rancher Attilio Genasci tells his story, and records his views on how, culturally and agriculturally, life has changed:
Posted by Matthew