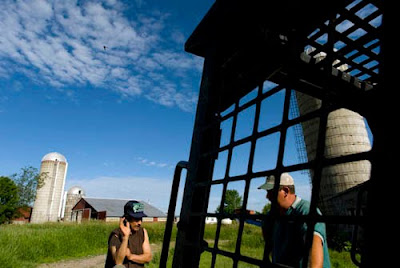 photograph by Caleb Kenna
The only thing that we want is to work and to have a better future in Mexico.
- A Migrant Worker
I would definitely prefer something different than the scenario that is in place at this time. It's uncomfortable to me as an American citizen to have to feel that I'm doing something wrong.
- Dairy Farmer

The Vermont Folklife Center is currently featuring Invisible Odysseys: Art By and About Mexican Farm Workers in Vermont, a collaboration between many facets of the local community: students at the Lincoln Community School, local Mexican migrant workers and artist/wrtier B. Amore. This exhibit was inspired by The Golden Cage Project, itself a collabartion between Chris Urban, a former Vermont Migrant Education tutor, and Chris Kenna, a photographer. Their work was previously on display at the VFC; here's how they describe the Golden Cage Project:

Migrant Mexican farm workers began arriving on Vermont dairy farms almost ten years ago and continue to work here living hidden lives. Through intimate photographs and interviews, this project strives to create a revealing portrait of dairy farmers and their Mexican employees and offer a glimpse into their interdependent lives--exploring who they are and what they hope for.
.....
Although this project focuses on Addison County, the same stories could be told in dairy farming communities around Vermont and throughout the United States. The documentary process brings this world into view in all of its complexity and contradiction.

The Golden Cage Project has a beautifully-designed website to go with the photographs and audio interviews of these farm workers. I'm sure that our readers may disagree on the specifics of immigration reform, but there is no denying the value of what's accomplished here by Mr. Urban and Mr. Kenna: they are telling a compelling and complicated story. 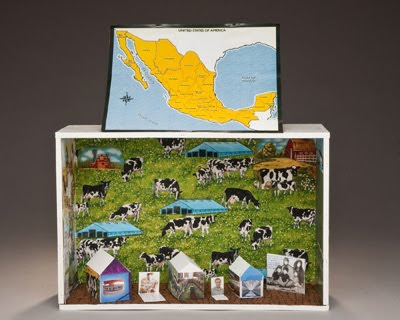 As seen above, the students involved in Invisible Odysseys created poetry, prose and visual art inspired by these stories. B. Amore also "brought paints, wooden boxes, and mixed media materials to Mexican workers so that they could engage in making three-dimensional representations of their personal journey."
The exhibit opens on April 22nd--we'll share more of the artwork and discussions in the coming weeks.
Posted by Matthew