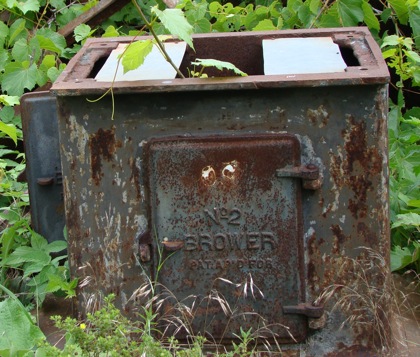 Cast-iron stove reclaimed by David Lundahl from a local farm;  the foundation for a new sculpture
While working on an Art of the Rural project at New Light Studios in southern Wisconsin, the self-created arts environment of David Lundahl (who, despite physical and economic hardship, rebuilt a dilapidated dairy farm into a vibrant arts space) I had a moment to learn that some of my comments after the recent Talk of the Nation piece on rural America were printed in The Daily Yonder, and that TOTN's Blog of the Nation gave The Art of the Rural an enthusiastic mention. It's an honor on both fronts, and timely, as I spent a good part of the drive up to New Light Studios thinking about the TOTN piece and its reception.
If folks haven't had a chance yet, I'd encourage a listen--and also a perusal of the TOTN comments section both there and on the Blog of the Nation follow-up.  Very quickly, the real concerns over the loss of rural posts offices were either swept off the table by some commenters ("These towns have no other buildings they can't meet in front of?") or subsumed into predictably digested political rhetoric ("If you want rural America to have stuff like P.Os., health clinics, and communications access, you'd better vote for a "big-government" Democrat.").
Of course, this is the level of discourse on a number of internet forums and comments pages--a gruesome spectator sport all to itself. What's different here is that, in my opinion, the Talk of the Nation piece was not entirely successful in its communication of the diverse set of complexities enmeshed in contemporary rural life--and it almost entirely ignored the question of rural arts and culture, the very fabric that unites these communities.
While NPR consistently provides some of best broadcast news and commentary to be found anywhere, and while (contrary to aforementioned political rhetoric) both my conservative and liberal friends seem to value its in-depth coverage (see the reports from the GOP straw poll in Iowa), I left the rural segment of Talk of the Nation discouraged on a basic level. Here's a portion of my reaction published in The Daily Yonder:

More than anything, I wish the NPR producers had the foresight to keep Dee Davis [President of the Center for Rural Strategies] on the line with Neal Conan for the whole segment, so that he could have helped contextualize the excellent perspectives of the guests.
This is telling: culturally speaking, as Americans, do we all assume we "know" the rural equally well? Do we admit that the "face" of rural America is changing, that there are many people in cities who identify as "rural," and that rural youth have a stake in these discussions?

Neal's language during the transitions spoke (alternately) to all the old assumptions about rural America: it's either a pastoral or a broke-down ghetto. The guests offered perspectives that challenged this, but I worry that the format of the segment and Neal's questions may, in the end, not have done the work of challenging his listeners--something NPR is generally adept at doing.

Writer and producer Mary Phillips-Sandy has added a much-needed critique of that use of language on her excellent A Lot of Consonants blog:

One of the things that stood out to me was the host’s use of the word ‘heartland’ as a synonym for ‘rural America.’ It’s a common idiom and a disingenuous one. Where is this heartland, exactly? Does the expression mean a geographic center or an emotional center? If the former, it fails to include all the parts of rural America that exist at the nation’s edges and farthest-flung points. If the latter it is patronizing, because it locates rural America in the realm of abstract sentiment, instead of on a map, right there, or right here.

An emotional center, in the realm of abstract sentiment: this eloquently gets at how Americans with little direct rural-experience can sometimes describe and qualify non-metropolitan life. If we think about this from a literary perspective, the use of "heartland" is simply an updated term for "Arcadia," that place of the literary pastoral invented by Theocritus--writing from the library in Alexandria, ca. 300 B.C. For this poet, it was a place of shaded groves of song and love, a landscape of man's communal experience with nature.
In actuality, Arcadia was a rocky and barren region where very little grew. Two millennia later, we find that readers (and nations) need to have a pastoral myth, a place to invest the unalienable values of their people. And, updated in the modern age, they also need to view their Arcadia simultaneously as back-woods region where acts and sensibilities that would not be tolerated in urban centers can somehow be found permissible (consolidated schools, drastically insufficient health services, mountaintop removal, and so on).
Whether the author is Theocritus or a speech-writer for any of the forthcoming 2012 campaigns, this language ignores one basic and inseparable fact: the rural and the urban are intimately connected.
Later this week we will look over some of the articles we have published--in an effort to provide some entry points for folks to pass around, to expand what we talk about when we talk about the rural.
Posted by Matthew