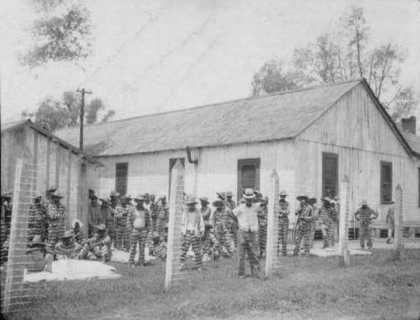 Angola Prison, with Leadbelly in the foreground; Library of Congress
A number of prisoners are channeling their experiences through music. These days it's official policy at Angola to encourage creativity – be it singing, crafts or painting. Assistant Warden Kathy Fontenot says it's not just effective prison management — it gives inmates an important tool for survival.
Prison Songs: The Angola Blues was recently broadcast on NPR's All Things Considered, and, in light of our recent writing on Alan Lomax's Southern Journey, this outstanding piece of radio journalism connects a pivotal moment in American folk music to our contemporary dialogue about incarceration, culture, and the arts. Producers Hal Cannon and Taki Telonidis have been producing Deep West Radio Documentaries over the last few years that have followed the path of John Lomax (Alan's father), a pioneering American folk music scholar. Mr. Cannon, the founding Director of the Western Folklife Center and The Cowboy Poetry Gathering, is a also an acclaimed musician; as a result, these radio pieces have an attention to music and culture that really "brings the story home," and makes for some memorable listening. Folks can learn much more about stories found along the path of John Lomax by visiting the WFC blog.
Prison Songs: The Angola Blues is a striking piece because it not only tells the story of Lomax's discovery of Leadbelly, but it traces a line forward to the ways that music has continued to be a positive presence in the lives of those who work and are incarcerated at Angola. Conditions inside have changed for the better since the 1930's, and the prison staff recognize the multilayered benefits the arts can provide to both individuals and the community (inside and beyond the walls).
What's so exciting about Mr. Cannon and Telonidis's work is that they've shown how--contrary to John Lomax's earlier wishes--popular culture has infused this work, how rural and urban, traditional and modern, meet and reside together. Folks can follow the link above to find three additional video performances by the musicians featured in the radio piece. Below we'll include "Jesus Died For Me," by Michael Palmer:

The Angola Rodeo is also produced on site and deserves a post of its own--it's further evidence of the attention to arts and culture that's being cultivated by the Angola staff.
Related Articles:
Alan Lomax and the Southern Journey
Cultural Equity
Holler to the Hood & The Thousand Kites Project
Posted by Matthew