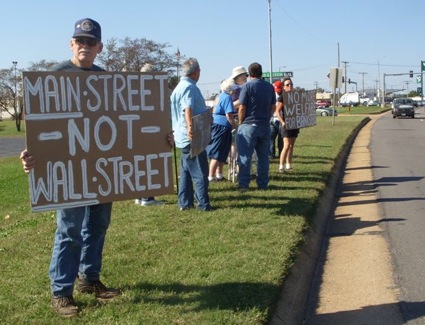 
This morning our Contributing Editor Rachel Reynolds Luster sent me word of some Occupy Wall Street gatherings and marches that are beginning to emerge in her region of southern Missouri.

As the photograph reprinted from The Hill 'N Holler Review demonstrates, these rural manifestations of the Occupy movement are intergenerational, and offer a more coherent and to-the-point articulation of specific demands.  Furthermore, their proposed solutions are local, practical, and eminently sensible.

Here's Carroll Lucas, in her article for the H'NH:

A group of about 25 persons showed up at the West Plains branch of Bank of America Friday afternoon, Oct. 7, and held their signs up in peaceful protest as part of the mushrooming national movement Occupy Wall Street. Occupy West Plains spokesman Dean Henderson said they decided to join in protest with the Wall Street kids and show their solidarity. He referred to Bank of America as an international bank that was a symbol of big money. He said people needed to withdraw their checking accounts, run them out of town and throw their support to local banks.

Some of the protesters told the Hill ’n Holler Review that they were there because they are part of the 99 percent. I’m uninsured and working part time, one said. She was referring to the slogan coined by this movement. “We are the 99 per cent that will no longer tolerate the greed and corruption of the 1 per cent.”

Rachel Reynolds Luster also organized an Occupy Oregon County march in Alton, Missouri yesterday. As I learned from corresponding with her this morning, the gathering was much like that which Ms. Lucas describes above -- and it also gathered folks from across the political spectrum. I asked Rachel if she might share her perspective on the role of rural people in this movement, and if she might offer some positive outcomes that might emerge from the larger Occupy movement. Here's her response:

I think it’s important for rural Americans to engage in this conversation. Sure, we don’t house the headquarters of the world’s financial system, but corporate greed and influence permeate our daily lives. They influence domestic and foreign policy that affect us. They influence environmental, energy, and agricultural policy which affects us. Many of the issues that we as rural Americans face, such as lack of access to broadband and adequate healthcare, can be directly tied to the fact that we are not a profitable investment. Corporate greed influences our personal possibility and the health of our communities on a daily basis. We are the 99%! It’s important that our voices are heard.

At the same time, I think that we carry the power to impart positive change. Certainly, I think there should be steps taken on the policy level to limit corporate influence in our government, but many actions, and perhaps the MOST powerful steps, can be taken on the individual and community level. If we all pulled our money out of major banking institutions like Bank of America and re-invested our money in community banks and credit unions that would have a measurable impact. We should support our local businesses. We can grow our own food and/or support those in our communities that do.

I encourage all Americans to participate in the current conversations concerning Occupy but I think that it is especially important for rural America and those who care about it to participate and make their voices heard. We are not a passive people. We are the 99%.

Are Occupy gatherings emerging in your part of rural America? Please let us know by contacting us on our Facebook page or at artoftherural at gmail.com.
Posted by Matthew