The NEA And Creative Placemaking In Rural America 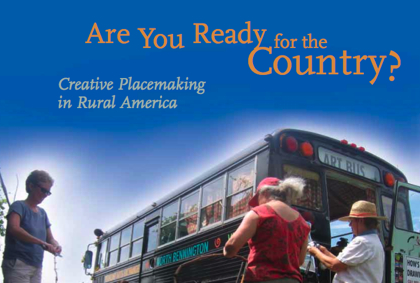 selection from the cover to the NEA Arts Magazine


On Monday we discussed Double Edge Theatre, a visionary laboratory theatre group that can help to expand the dialogue of what's happening--and what's possible--in rural America and the rural arts. This effort continues today, and is aided by the recent issue of the NEA Arts Magazine, which is entirely devoted to how rural arts and culture organizations are enriching their local and regional places.

Rachel Reynolds Luster and I will be covering each of these organizations in greater detail, but I wanted to make sure that our readers had heard of this issue's publication so that they can peruse it and send the Magazine around to friends and colleagues. Following the link above will lead to a pdf, as well as a wealth of online features--including some well-produced videos. Here is the NEA's introduction to this publication; I'll include links to each organization:

Since the beginning of the 20th century, the United States has turned from a mostly agrarian, rural country into an urban, industrialized one. According to the U.S. Department of Agriculture's Economic Research Service, nowadays only about a fifth of the population live in rural areas, even though those lands comprise more than three-quarters of the country and are a major source of the nation's resources, culture, and traditions. Rural America may be more connected than ever before -- through the Internet, better phone services, and improved transportation systems -- but it still faces unique problems. As populations moved from rural to urban/suburban communities -- and metropolitan areas expanded into areas that had been rural -- serious problems have been left in their wake: aging and inefficient infrastructure, lack of employment, increased poverty.

This issue of NEA Arts looks at the creative approaches rural communities have been taking with the arts to help improve their communities socially, aesthetically, and economically. In Vermont, the Orton Family Foundation is bringing artists into the community planning process, while in the middle of Arizona's Sonoran Desert, the International Sonoran Desert Alliance has turned an abandoned school into artist housing, leading to new economic growth for the small town of Ajo. Two rural towns in Washington State take different approaches to utilizing the arts to revitalize their communities. On the Fond du Lac Reservation in Minnesota, art is used in a health clinic to promote the Native culture as well as for its healing properties. And in North Carolina, HandMade in America has shown that the traditional arts are a viable, important part of the local economy as well as the local culture.

The NEA Magazine and its web features also consider Donald Judd and his influence in Marfa, Texas (via the Chinati Foundation), the NEA Our Town program, Dave Loewenstein's mural projects, and The Wormfarm Institute in Wisconsin.  (Folks can read our previous articles on Mr. Loewenstein here and Wormfarm here)

The term "creative placemaking" is discussed at great length in an excellent paper by Ann Markusen and Anne Gadwa; Creative Placemaking can be downloaded from the NEA here, and there's also a video that offers further information on the concept and its relevance to our current arts discussions:

In creative placemaking, partners from public, private, non-profit, and community sectors strategically shape the physical and social character of a neighborhood, town, city, or region around arts and cultural activities. Creative placemaking animates public and private spaces, rejuvenates structures and streetscapes, improves local business viability and public safety, and brings diverse people together to celebrate, inspire, and be inspired.

There will be much more soon on all these ideas and these inspiring examples from rural America. Until then, we can enjoy the Magazine and the NEA video work.
Posted by Matthew