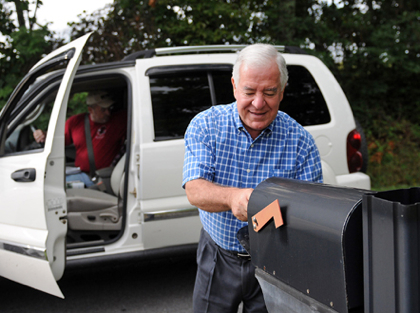 U.S. Representative Nick Rahall delivering the mail; Jon Bolt
The post office itself is often the identity of small town USA, and when you close the post office, it’s literally the nail in the coffin for that community. People go to the post office not only to receive mail, which is sometimes could be prescription medicines or some form of communications. They also socialize with their family and friends at the post office, learn what’s on their neighbors’ minds, and they gather to support community projects or issues. It’s ironic that in order to have these required hearings on these post offices, the only place big enough is the post office.
That's West Virginia Congressman Nick Rahall, sharing his thoughts with Greg Jordan of the Bluefield Daily Telegraph (found in yesterday's roundup in The Daily Yonder). Mr. Rahall was invited by Tim Thomason, a mail carrier and president of the West Virginia Rural Letter Carrier Association, to join him on his 90-mile 5-hour route this week--serving folks in some of the most remote parts of the state, folks that depend on Mr. Thomason for everything from prescription medications to NetFlix films. As The Daily Yonder has been covering for months, proposed cuts could drastically curtail the amount of USPS reach in rural America, and sever a vital social artery in these communities.
We might consider the outstanding video-mapping work below by Derek Watkins alongside Rachel Reynolds Luster's recent piece grappling with how we might faithfully map rural culture. When I watched this video for the first time, it was immediately clear that, as those little postal dots cross the continent, we are also seeing the spread of democratic representation, and the rise of a form of public discourse that undoubtedly made this country the predominant voice of the twentieth century--in the arts, sciences, business, philanthropy, and so on. In a cultural moment where we laud our technological "connectedness" just as liberals and conservatives can't even have a rational discussion with each other, we remove these physical and historical markers of community--and of democracy itself--at our own peril.
Here's Mr. Watkins's stunning visualization of USPS expansion. Much more information is available on his site:
Posted: Visualizing US expansion through post offices. from Derek Watkins on Vimeo.