Stan Neptune And The Art of Root Clubs 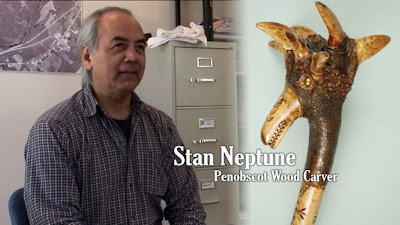 I recently learned that, in 2005, The Center for New England Culture featured the exhibit We're Still Here: Contemporary Indigenous New England Artists. Their online exhibit offers links to the artists and their artforms: baskets, jewelry, fiber arts, musical instruments and bead work. The site serves as a solid introduction to traditional Native American arts, and it contained a moment of discovery for me--as I was unaware of the practice of root club carving:

Traditional Wabanaki (Penobscot, Passamaquoddy, Mi'kmac, and Maliseet) root clubs are made of the stock and root bundle of grey birch trees. Today's carvers use poplar as well. Though pre-18th century root clubs may have been used as weapons, 18th-19th century clubs, embellished with fantastic, other-worldly faces, were used in spiritual ceremonies and are often called spirit clubs. By the late 19th century, the abundance of human faces on root clubs reflected an increased sales to non-Native tourists, moving away from the spiritual. In the 1920s, responding to the white man's idea of the "Indian," Wabanakis carved their clubs with western-style war-bonnets and sold them as war clubs.

Stan Neptune is a root club carver from Passadumkeag, Maine who aims in his work to "express the natural continuum between the Indian past and the Indian present." While the small space of this site won't do his work justice, try viewing this introduction to his work and the artform courtesy of The Maine Basketmakers Alliance and The University of Maine's Hudson Museum. In the process, you'll learn more about his family of artists; Joe "Hugga" Dana (a carver), Molly Neptune Paker (a basketmaker) and Jennifer Sapiel Neptune (a beadworker). This interview with the artist from The Bangor Metro is also a good place to visit to learn more.
Posted by Matthew