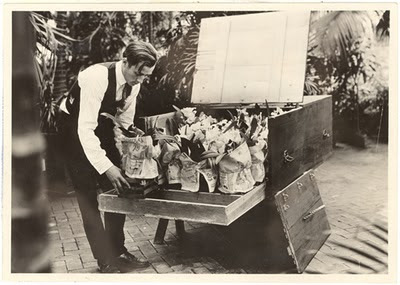 As spring arrives again, our thoughts turn to the fields, gardens and container plots waiting to be planted. Or, if we don't possess a green thumb, we wait eagerly for the warmer weather to bring the markets and roadside stands back into our lives, to sit down with that first bowl of spring greens, to bite into the first corn of summer or that first peach.
As we all look ahead to these joys, let me introduce Donald Culross Peattie. He's a figure we're going to keep close by this season. Here's how one blog has summarized Mr. Peatties many contributions:

Donald Culross Peattie was the pre-eminent Naturalist of his day. After leaving University of Chicago and French Poetry for Harvard and Botany, he worked for the Department of Agriculture and produced several works of mostly scientific value—his A Natural History of North American Trees is indispensable, authoritative and exhaustive. Later, he married the novelist Louise Redfield, and turned to nature writing as a career, for which he is most remembered. Through the 30’s and 40’s he published a dozen or so books directed to the general reader which were, owing to his popularity, distributed through many book clubs; he also wrote for Reader’s Digest and produced columns for the Washington Post and Chicago Daily News.

Yet Mr. Peattie's career as a writer and a naturalist was not always so certain. It was actually a combination of the depression years and a return to his wife's rural community that provided the springboard for his many later successes. Here's Peter Friederici of Chicago Wilderness Magazine setting the stage:

In 1933, in the midst of the Great Depression, Glenview, Illinois witnessed a subdued homecoming. A couple and their three young sons returned to the state of their origin after six years in the south of France. It was early winter, and bleak; the drought of the Dust Bowl had not yet broken. Glenview was more rural than suburban. Lacking snow, the northern Illinois farmlands looked "dingy now and threadbare." The great old bur oaks of the prairie groves appeared dead.
They were both writers. Their books had found publishers but not much of an audience. Jobless, the man doubted his own ability to provide for his family. "Still to put trust in me, I thought . . . was to perform more than I ever had yet," he wrote. For what, he wondered, had they left the warm delights of the Riviera?
Such was the homecoming of Donald Culross Peattie and Louise Redfield Peattie.

The book to emerge from from these Northern Illinois fields was An Almanac for Moderns (1935) a breathtaking combination of naturalism and poetry, with  a philosophical and observant eye that prefigures many of the agrarian writings that, a few decades later, would take a stand and argue for the validity and the necessity of rural culture. Remarkably, this book is currently out of print. (But can be found cheaply here.)

Here's Robert Finch describing the Almanac in The Norton Book of Nature Writing:


The "moderns" that Donald Culross Peattie wrote for in his An Almanac for Moderns were a skeptical generation. They were the descendents of Darwin and Freud and the inheritors of World War I, who had seen "the trees blasted by the great guns and the birds feeding on men's eyes." ... His deliberate choice of the archaic literary form of a daily almanac contrasted the stable natural order of the ancient philosophers and naturalists with the modern existential view of nature as soulless and purposeless. Its short 365 chapters not only pose many of the philosophical questions that have preoccupied contemporary nature writers, but also contain an informal survey of natural science and evocative observations of seasonal life.

In a technological and social moment when the "archaic literary form of a daily almanac" doesn't really seem that archaic, we're hoping to use this site (updated almost every day) to celebrate the work of Donald Culross Peattie--and to hopefully start a word-of-mouth campaign to give this author the new edition he richly deserves.