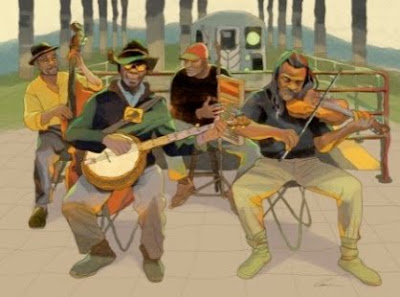 I recently visited the excellent Down Home Radio website and discovered, through Eli Smith's coverage of the event, The Black Banjo Gathering. It convened this year in late March at Appalachian State University, and featured five days of workshops, forums, and, of course, lots of banjo music. Most people associate the instrument entirely with rural, white musicians and traditions--and the gathering seeks to expand how we understand this instrument's legacy and its continuing cultural importance. As Tony Thomas writes on the Gathering's site:

The banjo is a product of Africa. Africans transported to the Caribbean and Latin America were reported playing banjos in the 17th and 18th centuries, before any banjo was reported in the Americas. Africans in the US were the predominant players of this instrument until the 1840s. Originally the banjos were made out of gourds and skins. The strings numbered between three and nine, with four- and five-string banjos being popular. A distinguishing feature was one or more short drone strings sounded with the thumb.
Banjo playing became an object of popular white culture in the US and later in Britain as a result of the Blackface Minstrel shows that became a popular form of entertainment in the 1830s and 1840s. Minstrels from the South who had actually learned real African-American music like Joel Sweeney popularized the banjo by introducing the clawhammer or frailing style that Blacks had brought from Africa. Commercial banjo makers later claimed that Sweeney invented the banjo in order to cover up its African origin. Sweeney did work with luthiers and drum makers to help perfect drum head banjos, the most common type, and is thought to have popularized the five-string banjo as opposed to the four-string banjo. Banjo playing became widely popular among working class and poor people both urban and rural. While African Americans continued their tradition with the instrument, whites also became fans, makers and manufacturers of the banjo.

The group encourages considering the heritage of the instrument, but also its future, and their numbers reflect this diversity of artistic approaches, as they include "African American banjoists who play old time music, classic banjo, blues, bluegrass, jazz and funk, as well as other banjoists, fiddlers, percussionists and scholars."
There's a wealth of material online about these musicians. One historical perspective to consider would be the Smithsonian Folkways' recording Black Banjo Songsters of North Carolina and Virginia and Gathering organizer CeCe Conway's book African Banjo Echoes in Appalachia. But this is just to begin to mention the wealth of material out there--look for future posts that expand on both black banjo artists and the instrument itself. Until then, here's video featuring the work of Gathering participants Otis Taylor and Carl Johnson: