Dancing The Dust To Digital 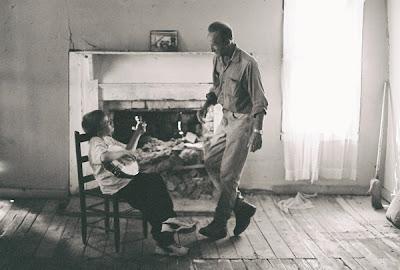 photograph from the Dust-to-Digital release
In the conclusion to Chris Sauter's essay Wandering the Back Forty: Some Ideas About a Rural Avant-Garde, which we mentioned yesterday, he makes a case both for how contemporary art must rethink it's modernist assumptions and for how rural artists stand in a unique place to lead in this reappraisal:

But the mindset of mistrusting tradition is problematic at the very least. In its most extreme mode, totally discarding the past has led us to the predicament we are currently in, untethered from earlier foundations. We have arrived at a time when Modernist rejection of the past and its problematic relationship to nature should come to an end. Many artists, including those discussed and featured in the following pages, are looking back to traditions rooted in the rural.

I was reminded of these lines again after discovering the newest release by Dust-to-Digital: Let Your Feet Do The Talkin', a documentary film directed by Stewart Copeland. As Dust-to-Digital has done with all of their releases, from their first ground-breaking release Goodbye Babylon to last year's Take Me to the Water: Immersion Baptism in Vintage Music and Photography 1890-1950, rural music and folk culture is not only preserved but also reintroduced into our modern lives and modern conversations.
Let Your Feet Do The Talkin' continues this attention and (along with its extensive DVD special feaures) promises to offer what one critic has called "a cinematic cultural exchange program." Here's the film's synopsis:

Let Your Feet Do The Talkin' tells the story of buck dancing legend Thomas Maupin, who, at the age of 70, remains one of the greatest old time dancers in America. The film presents a portrait of a folk icon reflecting back on his legacy as a father, teacher, and artist.

Numerous awards, trophies, and plaques lay stacked in a dresser in rural Tennessee where Thomas spends his weeks tending his garden, feeding the animals, and fixing the occasional lawn mower. However, on the weekends, Thomas travels all over the South performing anywhere there's a band and some flat ground; be it giant stages, historic theaters, or crowded street corners, almost always accompanied by his grandson, Daniel.

Here is Dust-To-Digital's explanation of buck-dancing, followed by a trailer for the film produced the Documentary Channel:

Rural buckdancing, like its urban cousin tap dance, is the result of the blending of steps and styles across cultures that has occurred in America since colonial times. Buckdancing is a traditional form of percussive stepdance that is experiencing a resurgence with young adults at old-time music festivals and gatherings throughout the South. As opposed to the memorized sequences of standardized steps performed by modern cloggers, traditional old-time buckdancing is improvisational and spontaneous and encompasses a wide range of steps and personal styles. While dancers may share some common steps, there is no prescribed footwork, and buckdancers like Thomas Maupin “do their own thing.” Providing percussion with their shoes, dancers “let their feet do the talking,” dancing out the rhythm of the tune and becoming a part of the music as they interact rhythmically with the musicians and other dancers.

If you are new to Dust-to-Digital, Atlanta's PBS affiliate has produced an excellent history of the label on view here. Also worth reading is Burkhard Bilger's New Yorker essay about the label and their Art of Field Recording releases.
Posted by Matthew