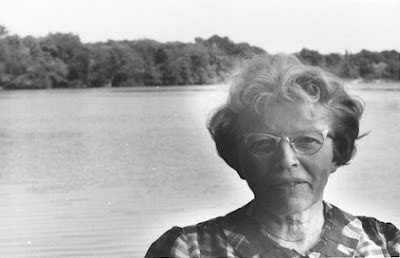 photograph by Bonnie Roub; from the Electronic Poetry Center
The Brontës had their moors, I have my marshes.
Two weeks ago we featured the first of a series of "calendar poems" composed by Lorine Niedecker (1903-1970), a poet from Blackhawk Island, Wisconsin. With the exception of a brief sojourn in New York City in her youth and a move to Milwaukee toward the end of her life, Ms. Niedecker spent the span of her days living, working, and writing along the banks of her native fishing community.
At a moment when American poets increasingly found themselves supported by universities, Ms. Niedecker chose to remain near Blackhawk Island and the neighboring town of Fort Atkinson; she took whatever work the local economy offered: proofreader, cleaning woman, librarian.  Her poetry appeared sporadically throughout her life, despite the support of contemporary figures the likes of William Carlos Williams, Basil Bunting, and Louis Zukofsky--her former lover.
Like the school of Objectivism advocated by Zukofsky, Niedecker treated the poem as an object all to itself, a structure which, in whole, could communicate with precision. As evidenced by the poems below, Niedecker added a local element as well as a gender perspective that enriched the work of these like-minded poets navigating the legacy of modernism. While we find in these poems an adherence to Williams's dictum "no ideas but in things," we also see here another use of "the vernacular," as a rural expertise and a local language is brought to bear on this avant-garde poetics. The results are profoundly, movingly, different than her contemporaries' work:

[Untitled]
In the great snowfall before the bomb
colored yule tree lights
windows, the only glow for contemplation
along this road. I worked the print shop
right down among em
the folk from whom all poetry flows
and dreadfully much else.
I was Blondie
I carried my bundles of hog feeder price lists
down by Larry the Lug,
I'd never get anywhere
because I'd never had suction,
pull, you know, favor, drag,
well-oiled protection.
I heard their rehashed radio barbs--
more barbarous among hirelings
as higher-ups grow more corrupt.
But what vitality! The women hold jobs--
clean house, cook, raise children, bowl
and go to church.
What would they say if they knew
I sit for two months on six lines
of poetry?

There has been a groundswell of interest in Ms. Niedecker's poetry in the last decade, highlighted most beautifully in Jenny Penberthy's edition of Lorine Niedecker: Collected Works. For further information, turn to the Friends of Lorine Niedecker, an organization based in Fort Atkinson; each year they host a poetry festival in honor of Ms. Niedecker that attracts poets and critics from across the country. The town also houses her archives in The Hoard Historical Museum and The Dwight Foster Public Library.

Lastly, folks may be very interested in viewing Cathy C. Cook's lyrical documentary Immortal Cupboard: In Search of Lorine Niedecker.  Contained below is a brief clip from the film;  a half-hour  interview with Ms. Cook from Wisconsin Public Television's Director's Cut can be found here.
Posted by Matthew