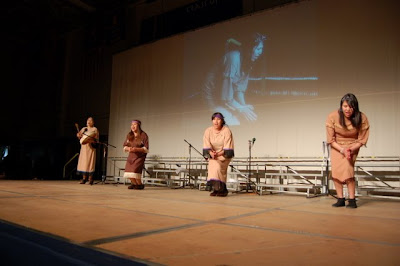 photograph of the 2010 Mount Edgecumbe Dancers via The Bethel Council on The Arts
Here's three items worth checking out over the weekend, between enjoying the summer weather, rooting for the US Soccer Team and relaxing in general:
I. If you took interest in our write-up of The Tundra Telegraph, pay a visit to The Bethel Council on the Arts: they host a series of arts events that highlight both contemporary and traditional forms of expression--with a specific emphasis on dance. Through this site and The Tundra Telegraph, there's a whole world of Native Alaskan dance to discover; we'll be featuring more soon. Check out their site for the 2010 Cama-i Dance Festival, where, aside from a photo archive of the event, they are featuring a streaming selection of songs heard at the Festival. this week, then check out.

II. The Daily Yonder recently published this reflection by Dee Davis, the President of The Center for Rural Strategies. Mr. Davis reads in the current events emanating from the gulf a profound historical narrative that, as a country, we avoid at our own peril:

Dandling just above the sprawling crude is the future of hundreds of small towns and villages that have endured for generations, many since before we were a country. Whatever the odds, they’ve sustained themselves, the fisheries, the rookeries, and a uniquely American cultural heritage. And they’ve done all that sustaining in the face of storms, floods, pestilence and worse -- but maybe nothing worse or more toxic than what they face today, a spill with the potential to suffocate the ecosystem and chase away the towns.
In this sense “rural” is not empty expanse, or the trees and farms between the cities, or even the place where the rest of us get our supplies of natural resources. Now, “rural” is the test of our sustainability.  What must endure? Whose places are we willing to sacrifice for some notion of a greater good and smoother sailing?  Who gets to go home again?

III. We've written before about The Revivalist, an excellent new blog authored by Mark Lynn Ferguson that focuses on Appalachian arts and culture. Mr. Ferguson has recently written about the peculiar business of accents and the culture of beaten biscuits, among other things. You may also want to visit his interview with Mike Geiger, the creator of the County Ghost cartoon. We'll include one of Mr. Geiger's episodes below:
Posted by Matthew