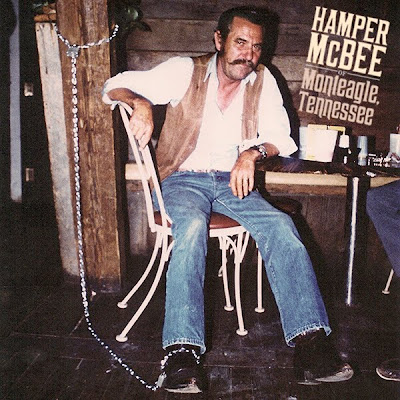 Well they got some damn songs, now, hell, a man can't even figure out what in the hell's going on, don't you know. But the old songs, usually they was made in telling a damn story. A lot of the old English, old Irish ballads--they'd tell you story, a tragic story, usually. But they make some songs now that don't show you nothing.
This week the Twos & Fews label is releasing The Good Old-Fashioned Way by Hamper McBee. This record is an instant classic--a document of a singer, a storyteller and a spirit that, in this combination, truly has no match. Readers of this site may remember our earlier post on the label and its curator, Nathan Salsburg. At that time we discussed Nimrod Workman's I Want To Go Where Things Are Beautiful, as well as Mr. Salsburg's work with Cultural Equity, his excellent radio show and his own music. This latest recording seems to draw from all of these streams and--among the folk/field-recordings I have heard--occupies a space all to itself.
Charles Wolfe, in the included liner notes, does the herculean effort of succintly describing all the facets of Mr. McBee:

Here is Hamper McBee, the ginger man of Monteagle Mountain. He's a fine singer, a hard worker, a hard drinker, a wildly funny storyteller, a semi-reformed moonshiner, and a general all-purpose life force in this end of Southeastern Tennessee. Here he is at his best, relaxed, among friends, working his way through a couple of six-packs, sitting in Jake Marlowe's big front room, telling stories and singing his songs in the way that has made Hamper a local legend, and has won him friends from Memphis to Johnson City.
..........
Hamper was born in 1931, in Emory Gap in Roane County, Tennessee, but moved to Sewanee when he was a small boy. His father was a state highway inspector who supplemented his income by searching the mountains for herbs and roots. Hamper himself did this for a time after he quit school--he sold Black Haw bark for 65 cents a pound--and then in 1950 joined the army, doing a hitch in Korea and Germany. "After that I started in to making whiskey," Hamper recalls. "And I stayed drunk a lot of the time. I did all sorts of jobs: construction, timber cutting, mule driving, working in taverns. Spent some time working for three or four carnivals." All the jobs usually lead back to Monteagle, though, and it's there that Hamper lives today, in a trailer set back in the woods a few hundred feet from I-24.

Mr. Wolfe's reminiscences above are reprinted from a 1978 lp, Raw Mash, that has long been out-of-print. As it stands, Twos & Fews is effectively bringing the music and the storytelling of Hamper McBee back into the American vernacular and, via its partnership with the Drag City label, introducing this man to a new generation of listeners. Here's Mr. Salsburg's own thoughts on discovering the work of Hamper McBee for himself, published on his Root Hog or Die blog:

I had only heard of the moonshiner, carnival barker, singer and raconteur Hamper McBee (who was first recorded by Guy Carawan and ended up an impossibly scarce Prestige LP called “Cumberland Moonshiner” in 1965) in passing – just as a subject of one of [Sol] Korine’s films I had never seen – until I met Sol himself through his filmmaking son Harmony. Knowing my interest in those folkloric films of his dad’s, made with Blaine Dunlap in the ’70s, Harmony had a screening of Sol and Blaine’s “Raw Mash” profile of Hamper in his Nashville home, and it rendered me speechless. There’s no other way to say it: Hamper was an absolute original. His clothes; his mustache and pompadour; his lusty dedication to booze, cigarettes, and light cussing (“goddamn” and “hell” being foremost in his lexicon); his keen intelligence and creative grace (sincerely) sharing space in his conversation and repertoire with hysterically bizarre, irreverent, and filthy songs and tales from a life spent on the carnival circuit, at the moonshine still, in the Wauhatchie railroad yards, in the back of Sheriff Bill Malone’s patrol car, and as Hamper McBee.

The above song, "Jasper Jail," is included in a different from on this newly released album, which was recorded by Charles Wolfe and Sol Korine in Mr. Mcbee's home in November of 1977 and January of 1975. Click here to listen to the version of "Jasper Jail" as it appears on The Good Old-Fashioned Way. I'll leave it to our readers to pick up the record to learn more about Mr. McBee's thoughts on drinking on Sundays, making moonshine, and all his other philosophies on life, love and work. If for no other reason, his story about "Hot Rod Hogan," a carnival monkey, is worth the price of admission. "The Good Old-Fashioned Way," in all its forms, is the true art of Hamper McBee.
Posted by Matthew