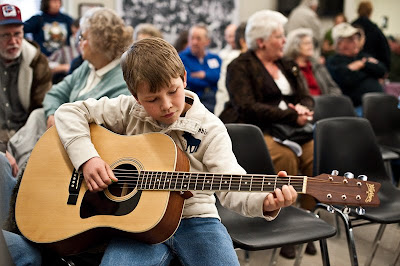 Photograph from the Tommy Jarrell Festival, via The Surry Arts Council
Today we would like to share more information on the music scene surrounding Mount Airy, North Carolina--the home of WPAQ and the "Merry-Go-Round" weekly radio show we mentioned last week. We would also like to thank The Rural Blog for  featuring our write-up; it's an honor to be part of the site's conversation, as our daily reading of The Rural Blog was one of the sparks of inspiration which led us to start The Art of the Rural.
One of the first places to begin exploring the musical abundance of the Mount Airy region would be The Surry Arts Council; based in Mount Airy, the Arts Council features a host of events from jazz, theater, and dance performances to The Tommy Jarrell Festival. Mr. Jarrell (1886-1985) was a legendary and widely-influential fiddler from the Mount Airy region, and the Festival in his honor is held each year on the weekend preceding his March 1st birthday. A fine biography can be found here, while Mr. Jarrell can also be seen in Alan Lomax's film Appalachian Journey. The  1991 film was produced in conjunction with The Association For Cultural Equity and is featured above on the excellent Folkstreams film archive.
Mr. Jarrell is also featured in the extraordinary films of Les Blank, an artist the New York Times aptly described as "a master of films about the American idiom." His film titles tell the story of his peripatetic documentary imagination: Dizzy Gillespie, Gap-Toothed Women, and Ziveli! Medicine For the Heart (a look at Serbian-American communities). Here's My Old Fiddle (1994),  a follow-up to this 1983 documentary on Tommy Jarrell Sprout Wings and Fly:
North Carolina Public Television's Folkways program, hosted by folk-musician and storyteller David Holt, recently produced this excellent half-hour piece on the musicians of Surry County, documenting the origins of the Surry County sound. There's some wonderful stories and anecdotes about Mr. Jarrell and his fellow musicians:
As if the videos above aren't enough to make you want to move to Mount Airy, there are also these clips courtesy of the Music Maker Relief Foundation, an organization with a mission to "help the true pioneers and forgotten heroes of Southern music gain recognition and meet their day to day needs" while presenting these musical traditions to larger audiences and working to preserve these artforms. Here's a music lesson with Mount Airy fiddler Benton Flippen, followed some video from his time at the 28th Annual Mount Airy Fiddler's Convention:
Posted by Matthew