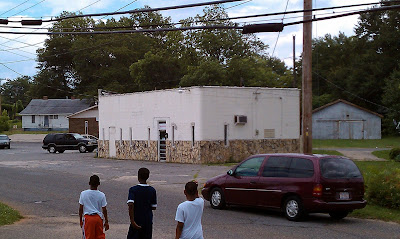 The former Washington Sound on Buffalo Street in Shelby, NC; from Carolina Soul
Throughout the sixties and seventies, at least one hundred African-American-owned R&B/Soul record stores thrived in the Carolinas. These retail shops, with their close links to recording studios and local record labels, were on the front lines not only of new musical ideas, but of the civil rights struggle itself. Today, this music's story is being told in a compelling fashion on the Carolina Soul blog/archive, which has spent the last five years locating and documenting the wide array of R&B/Soul music created in North and South Carolina--much of which has never been re-issued since its original release as 45 rpm records.
If you peruse Carolina Soul's extensive discography the material object of the vinyl record begins to stand as a symbol for a kind of rural-urban linkages that revolutionized the last half-century's artforms and its push toward social justice.  This effort to rediscover these recordings, and to tell the stories of these musicians and their communities, is led by Jason Perlmutter (a chemist and local music collector) and Jon Kirby (an associate editor at Wax Poetics). Mr. Perlmutter, in partnership with folklorist Brendan Greaves, has begun the Paradise of Bachelors record label and is currently pressing their first release -- a retrospective of the music released on David Lee's various record labels entitled Said I Had A Vision.
Mr. Lee, who currently resides in Mooresboro,  ran the Impel, Washington Sound and SCOP (Soul, Country, Opera, Pop) labels and often contributed his own songs to his musicians. Carolina Soul recently visited Mr. Lee, and, earlier in the year, the folks behind this project spent time talking with some of the artists who worked with him. Here we see the The Constellations, both then and now: 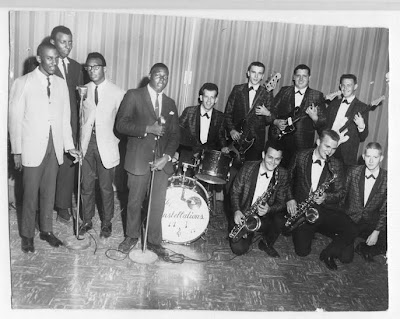 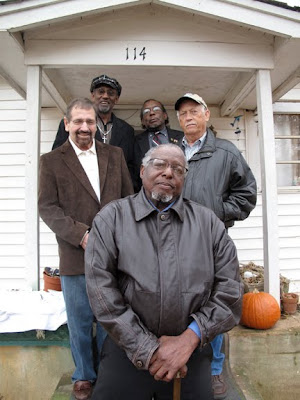 Here, from the Paradise of Bachelors' blog, is a description of the ground-breaking work done by The Constellations:

We spent an illuminating and pleasant afternoon in Mooresboro, North Carolina with the Lees; Harold Allen, Don Camp, William “Butch” Mitchell, and Benjamin and Bryan “Brownie” Guest of the Constellations. Hearing these gentlemen’s stories about unflagging brotherhood, camaraderie, and the timelessness of “love ballads”–in the face of physical threats, racist invective, and a Southern and national climate opposed to their very existence–was truly inspiring. The Constellations were the first mixed-race combo in the area, and they did it as mere kids, getting started in 1958 or 1959 as teenagers and only dissolving upon the departure of members to Vietnam in 1964 and 1965.
In that time, they recorded six energetic sides for David Lee, all of which belie their tender ages, plus two unreleased tracks–”Have You Seen My Baby?” and “I Want to Jerk”–which Mr. Lee sent to Benjamin Guest while he was serving in Vietnam. Those tapes may yet emerge for your delectation…

We can only hope to that some of this music makes its way on to Carolina Soul or onto a newly-pressed piece of vinyl via Paradise of Bachelors.
As a closing note, for those who would like to hear these gentlemen put these songs into a more eloquent context than I can provide, please refer to their interview with Frank Stasio on NPR's The State of Things.
Posted by Matthew