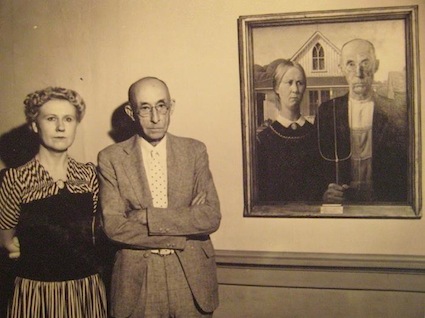 [Editor's Note: As I am facing numerous writing deadlines over the second half of February, this seems like a good time to give a retrospective glance to the first two years of Art of the Rural. Over these weeks I will feature a few new articles, but also many favorites from the archives. Thanks again to everyone who has read and contributed; what began as a labor of love has become a project far larger, and far more rewarding, than I ever could have anticipated - and I deeply appreciate the readership and participation of such a diverse audience. In March we will offer new articles and series, and share some new projects related to our mission.

This morning The Daily Yonder published an excellent review of Grant Wood: A Life, a new study of the legendary regionalist painter by R. Tripp Evans. Within her review "The Edgy Idylls of Grant Wood," Cyndy Clark notes many of Evans's new ideas on the use of gender and sexuality in Grant Wood's work--and Ms. Clark finds a way to artfully integrate this shifting interpretive terrain into the lines of the artist's most iconic canvas, American Gothic:

One of Wood’s eccentricities seems to have been a fascination with death and funerary subjects.  According to Evans, the gothic arch was a common 19th c. American folk art form that referred to mortality. Wood and his mother lived for ten years in a small apartment above a Cedar Rapids funeral parlor with a coffin lid as its front door, so the connection seems reasonable.  The American Gothic house may also represent the place where Wood spent the first eleven years of his life, in Anamosa, Iowa, the house where his father, Maryville, died.  The artist spent those early years hiding his artistic talents from Maryville, a man’s man who considered art feminine and only for sissies, an attitude consistent with his Midwestern contemporaries. Wood said, regarding his father’s disapproval of his art, “For a farmer’s son in Cedar Rapids, Iowa, to say he wanted to paint pictures for his life work was as startling as a girl to announce she wanted to live a life of shame.”

Wood’s troubled relationship with his father contributes an obvious and psychologically predictable influence on many of his paintings.  Although the model for the male figure in American Gothic was his dentist, his resemblance to Maryville, a stern Quaker, is striking and confirmed by Wood’s sister, Nan. The prongs of the pitchfork, echo the seams of the farmer’s overalls and form the letter “W,” to evoke Maryville Wood.

Ms. Clark's review continues on to make a number of important connections between the varying responses to American Gothic, suggesting that we still have much to learn from Mr. Wood's situation, his place in that time-honored American-Arts-Bermuda-Triangle between rural, urban and academic spaces, and from the ideas he so gracefully articulated on canvas.

Her writing led me back to an essay of Wood's I hadn't read in long while: "Revolt Against the City." As modern readers, we can scan the lines below in full cognizance that rural and urban spaces are inescapably interconnected, that a "revolt" from one merely means hardship for those involved in the rebellion. With this book review in mind, we come to understand that Grant Wood may not have argued such a basic dichotomy. Instead of revolting against the city, perhaps Mr. Wood would point the contemporary rural arts towards considering how they anchor regional artistic (and economic) centers:

Because of this new emphasis upon native materials, the artist no longer finds it necessary to migrate even to New York [or to emulate French painting, which Wood discusses before this quote], or to seek any great metropolis. No longer is it necessary for him to suffer the confusing cosmopolitanism, the noise, the too intimate gregariousness of the large city. True, he may travel, the may observe, he may study in various environments, in order to develop his personality and achieve backgrounds and a perspective; but this need be little more than incidental to an educative process that centers on his own home region.
.....
Let me try to state the basic idea of the regional movement. Each section has a personality of its own, in physiography, industry, psychology. Thinking painters and writers who have passed their formative years in these regions, will, by care-taking analysis, work out and interpret in their productions these varying personalities. When the different regions develop characteristics of their own, they will come into competition with each other; and out of this competition a rich American culture will grow. It was in some such manner that Gothic architecture grew out of competition between different French towns as to which could build the largest and finest cathedrals.
.....
I am willing to go so far as to say that I believe the hope of a native American art lies in the development of regional art centers and the competition between them. It seems the one way to the building up of an honestly art-conscious America.