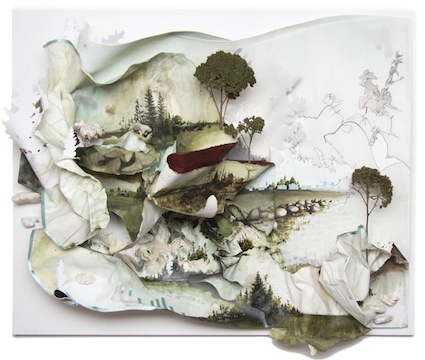 if i was the river i was only projecting; Gregory Euclide

In the two years since The Art of the Rural began, we've seen how rapid changes in new media have enabled rural artists to not only share their work, but to create networks and movements that transcend the easy boundaries that might define "rural arts and culture."

The emergence of the Rural America Contemporary Art group (RACA) is a significant addition to this groundswell of interest in the process and products of art-marking outside of the cities. As with complementary movements in vernacular music and socially-engaged architecture and design, the work of RACA suggests how aesthetics, composition and social (and spatial) awareness can be successfully integrated - and how the end result can produce something that, as with Gregory Euclide's relief work above, refuses to be confined to traditional dimensions.


RACA's slogan, "Making somewhere out of nowhere," speaks to the group's directive. Writing in mnartists.org, Stephanie Ash recently sat down with artist and Minnesota State University-Mankato art professor Brian Frink to learn about the origins of the group and its robust Facbebook open group:

MSU art professor and contemporary painter Brian Frink didn't start it. He just named it and collected it in one place. Bouncy, good-natured, and a bit of a schemer (he convinced his wife they should buy an abandoned poor farm south of Mankato -- and then raise their kids there), Frink started to notice something peculiar in his students: The drive to leave home and strike out for New York or other large "art cities" to embark on a career seems to be dissipating.

And he noticed something else: Artists he knew were connecting with each other, with audiences, and even with paying customers via Facebook.

The two, he believed, must be related. Unlike Brooklyn in the '80s, where Frink rented a 2,000-square-foot loft/studio for $150 a month, today's young artists are priced out of the famous art cities. What young person can afford studio space in San Francisco, New York, even Chicago? Most of them can't even afford to rent an apartment there. Plus, the critical interaction and cross-pollination of ideas on which contemporary art relies -- once the domain of big urban populations -- makes its home on social media now, and can be hosted by anyone with a domain name.

Late last year the Facebook conversations jumped from the computer screen to the white walls of The Arts Center of St. Peter, for the first group show. The exhibit featured the work of fourteen artists, many of whom hail from the upper Midwest; as the group's Facebook page suggests, further RACA shows and publications will be forthcoming shortly. We look to feature additional information on RACA and its artists soon.

The cultural imperative behind such a movement was heralded two years ago by Chris Sauter in his prescient work as curator of an ArtLies special feature on rural contemporary art; his introduction, "Wandering The Back Forty: Some Ideas About A Rural Avant-Garde," looks ahead to the advances and collaborations made possible by two more years of developments in new media platforms:

Contemporary art is seeing a surge of interest in what I call “the rural.” I’m sure there are many reasons for this, but one decisive factor appears to be a shared reaction to anxiety. I am reminded of Regionalist painter Grant Wood’s essay Revolt Against the City (1935) where he quotes Carl Van Doren, asserting that any society—American society in particular—tends to re-evaluate itself every thirty years or so in response to some kind of outside trauma. We are currently facing compound concerns on a pandemic level: political unrest (9/11, wars in Iraq and Afghanistan, terrorism, partisanship), social unrest (gay marriage, nationalism, immigration), environmental concerns (global warming, genetic engineering, carbon footprints), economic meltdown…the list goes on and on. To alleviate a perceived loss of control, individuals search for a sense of grounding. In my opinion, a return to the rural seems to be the latest form of such introspection, and as a result, artists are looking back to traditional—and perhaps more stable—ways of life. We are witnessing a preponderance of agricultural/community gardening projects, references to rodeos, cowboys, taxidermy, hunting, an interest in vernacular architecture, etc.

In another figure of how this work is pushing against rural stereotypes, Sauter notes that "the rural in contemporary art is happening in various parts of the world," and one can easily see how RACA and the artists contained in the ArtLies edition find commerce and community across political and geographic lines. Sauter expresses the potential for such exchanges with eloquence:

Having grown up on my grandparents’ ranch, the rural, for me, is tied up with identity. Although most people now live in and around cities, many practicing artists are not native to urban areas. Embracing their roots is a way of acknowledging and clarifying identity—of mining their personal, formative experiences to produce work that is at once contemporary and local. I am again reminded of Grant Wood’s Revolt. His ideas seem particularly interesting now, as technology has performed a major role in creating global homogenization while at the same time making it possible to share remotely generated ideas on a global scale. Art that reflects non-urban sensibilities not only adds to the rich texture of contemporary art but points to possible connections between seemingly disparate cultures.

Below we offer the list of artists included in the first Rural America Contemporary Arts show. The work which follows on these sites also presents powerful visual evidence to one of Sauter's other assertions - that rural artists are offering a new perspective to common notions of modernism's legacy (urban, rootless, and disassociated with the past).

It's hard not to get excited after a visit to these artists' portfolios - this group has built a movement that promises to not only challenge our academic and disciplinary definitions, but also to inspire audiences both in rural and urban areas to think for themselves about the place of the rural arts in our broader cultural landscape.

Please visit these artists' sites for large, high-resolution image galleries; many are also active contributors to the discussions on the RACA Facebook group: