Responding To The Kansas Arts Veto 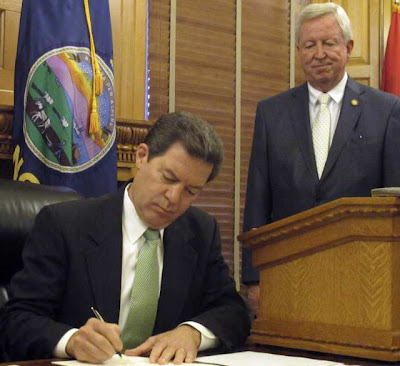 
[Editor's Note: As I am facing numerous writing deadlines, this seems like a good time to give a retrospective glance to the first two years of Art of the Rural. Over these weeks I will feature a few new articles, but also many favorites from the archives. Thanks again to everyone who has read and contributed; what began as a labor of love has become a project far larger, and far more rewarding, than I ever could have anticipated - and I deeply appreciate the readership and participation of such a diverse audience. Starting March 19th, we will offer new articles and share some new projects related to our mission.

Responding To The Kansas Arts Veto was originally published on June 21, 2011. To learn more about how national foundations only give 1% of their funds to rural America, please see our article here.]
**********
As many of our readers have heard, Kansas Governor Sam Brownback used the power of his line-item veto to erase funding for the Kansas Arts Commission from the 2012 state budget, a move that effectively shut down the organization and fired its staff. By deleting this state-sponsored entity, Governor Brownback also shut the door on matching funds The National Endowment for the Arts would have granted to the Kansas Arts Commission.

Today we'd like to offer some viewpoints and commentary on this issue and its devastating repercussions for rural communities. We'll begin with this recent NPR report by Elizabeth Blair, aired on Morning Edition last week. Ms. Blair's piece is an excellent introduction to this debate, and to the contrary opinions by some in the arts community that suggest private funding would be a more effective and more liberating avenue. Below is an excerpt:

Private dollars have been really good for the Topeka Civic Theatre and Academy where Shannon Reilly is artistic director. The company is celebrating its 75th year. "Through most of that history we've been funded solely through ticket revenue, donors and corporate support," Reilly says.

Reilly says for the most part, they have avoided government grants and that has worked to their advantage. "More and more I've seen that arts organizations ... receiving tax dollars were constantly under fire about their programming and what they were doing," Reilly explains. "I like being responsible to my donors and to the people who were investing in what were doing more than a larger tax base."

While this model is certainly attractive, only at the close of her piece does Ms. Blair allow for this harsh reality: private funding for the arts is likely to replace (or exceed) public funding only in urban areas. We can turn to this Kansas Citizens for the Arts press release for further analysis of the rural dimension to Governor Brownback's arts veto:

“With a stroke of his pen, the governor cost the State of Kansas $1.2 million,” said Henry Schwaller, chairman of the Kansas Arts Commission. “On July 1, nearly 200 local arts organizations and artists will lose critical support for local arts programs, operational funding and professional development. Without this support, jobs in the arts are at risk, and artists and arts organizations will lose the important infrastructure that has been created largely because of the funding and expertise of the Kansas Arts Commission.

The horrible irony here is that Governor Brownback's veto will disproportionately affect the life of the rural communities from which he has drawn overwhelming political support. His gambit overlays a national "culture wars" argument on the local arts programming in towns far removed from urban centers.  As The Kansas City Star writes in a recent editorial, Governor Brownback is "hoping to make points with conservatives nationally," while ignoring the local and regional dynamics:

As was the case with Brownback’s misguided attack on public broadcasting, he’s applying a national conservative cause to his home state, without considering the damaging impact on rural areas. Public broadcasting provides one of the only sources of news and information in the sparsely populated western half of the state. Urban areas, the target of this notion, have other options and can replace public funding. The elimination of public arts funding, again, isn’t likely to hurt the Kansas City area as much as Lincoln County, Kan.

As rural developers know well, while technology makes it possible to create new business in the high plains, new business will consider quality of life as much, perhaps more, than tax advantages. Brownback has handed surrounding states an effective tool to beat Kansas communities looking to attract doctors and needed professionals.

In the space of this site, we've tried to document and also to complicate the notion of "the rural arts," but Governor Brownback's arts veto sets a giant and unmistakable corrective in the midst of this project. While we can turn to The Daily Yonder and The Rural Blog for their excellent and consistent coverage toward defining what's at stake in the organizing "rural" moniker, there's another dimension to the other half, the "arts" definition, that we at The Art of the Rural have been perhaps slow to cover--and it lurks beneath the articles excerpted above.

This would be the irreducible political element, voluntary or not, that always coheres around the reception of the rural arts. What we find here is an amalgamation of regional assumptions, as well as preconceived notions about the "place" of the arts; in many respects it's a remnant of the politically polarizing climate of post-9/11 America. To return to the dreaded red-state/blue-state mindset (as I intimately learned while living in Boston), a great deal of people from the larger urban and suburban centers of America implicitly view arts-making as a "blue state" activity, complete with its own ideologies and politics.

What the Kansas arts veto makes abundantly clear is that even some public leaders from the interior of this country--despite a wealth of evidence beneath their noses--have refused to challenge this cultural orthodoxy, despite how reductive and just plain-wrong it might be. This is not a Republican vs. Democrat or conservative vs. liberal argument, but a case of recognizing that the arts are vital to all communities, and that they can speak for a range of viewpoints and cultural histories beyond the boogey-men of Robert Maplethorpe nudes or Chris Ofili elephant dung paintings.

In turn, those of us making art and working to ensure its reception need to continue to stress its "site specific" nature, and we need to welcome work which challenges our own political and cultural orthodoxies.

In closing, we will offer an excerpt from last weekend's Kansas City Star editorial by Joyce DiDonato, arguably the most acclaimed opera singer in contemporary classical music. Born in Prairie Village, Kansas, Ms. DiDonato has spoken up for her home state in interviews around the world, and in the press following her award of the illustrious Gramophone "Artist of the Year" in 201o. (Her broken-leg performance of The Barber of Seville has become the stuff of opera legend.)

Here is an excerpt from Ms. Didonato's eloquent response to Governor Brownback's decision:

This is the Sunflower State that I have proudly boasted about across the world, fearlessly defending it even in the face of harsh quizzical looks from the most skeptical of folks (“You live where?”). It’s the state of my first piano recital and choir concert. The home field of my artistic curiosity and education. The homeland that taught me to freely dream big and without limitation; one where the arts were once alive, vibrant and supported.

I’ve welcomed the assumption of being an unsolicited but mightily proud artistic ambassador for Kansas to the great cities of the world. Now, for the first time, I feel shame. Eliminating a state arts commission is an ignorant, short-sighted, fearful and unspeakably damaging act to the spirit and soul of this great state.

I’m not a politician or historian. I’m a humble opera singer, a home-grown product of an agricultural state that used to value the arts, like all great societies and cultures of the past. But my anger rivals a good ol’ western Kansas Category 5 tornado’s destructive force when I begin to think of where I’d be without an education fueled by the arts that informed my way of thinking. Or without a community theater, choir or art exhibit that gave me true solace and an emergency exit from some of the great crises in my life. Or without that musical outlet that helped me understand myself and the mystery of life a little better.