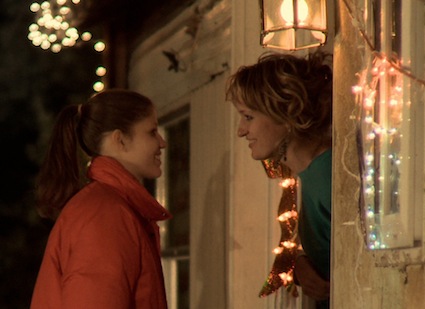 
These lines accompany the Kickstarter campaign for an exciting new project: AWOL, a critically-acclaimed short film that recently took home honors at the Sundance Film Festival and elsewhere. Director Deb Shoval, alongside an accomplished team of producers and writers, is looking to expand this story into a feature length film.

As this selection from the film's introduction demonstrates, we encounter in AWOL a story, and a series of concerns, too often left off the screen. Please find the Kickstarter video below as well, with much more information on this film's accolades and its mission:

Joey, 19, is a recent high school graduate who is slowly working her way toward nothing in rural Northeast Pennsylvania. Physically strong and honest, Joey lives up to the low expectations of others until she meets Rayna, 28, a sexy, married mother of two who is vivacious, bold - and lonely. Despite the realities of her Appalachian poverty, Rayna exudes a joie de vivre that is addictive. Rayna seduces Joey, and Joey is smitten.

But when Joey’s mother announces that it is time for Joey to move out, and Rayna makes it clear that their trysts will never become anything more, Joey must make some choices about her future in a post-industrial area with little to offer. With Rayna’s encouragement and without any other viable options for housing or employment, Joey joins the Army.

As summer becomes fall and fall becomes winter, Joey and Rayna exchange letters and fuel their passion. At Christmastime, just before her deployment to Afghanistan, Joey returns home with her first assignment: ten days of “hometown recruitment” in the local mall. Preoccupied by her infatuation with Rayna, Joey concocts bigger plans to run away from her home, her family, and the Army with Rayna and Rayna’s kids.