The Rebirth Of The Small Town Movie Theater 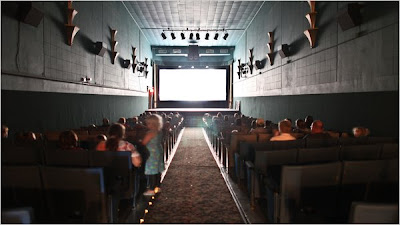 photograph by Fred R. Conrad, New York Times
We're back today from an extended Fourth of July holiday with two items. First, below this post, is the next installment in our Almamac For Moderns project: one of Donald Culrosss Peattie's dispatches that might resonate with readers who spent the holiday vacationing away from their usual part of the world.
We're also passing along this article by Patricia Leigh Brown on the resurgence of small-town movie theaters across The Great Plains. Her piece appeared in The New York Times on the Fourth of July, so some folks may have missed it. "In an age of streaming videos and DVDs, " Ms. Brown writes, "the small town Main Street movie theater is thriving in North Dakota, the result of a grass-roots movement to keep storefront movie houses, with their jewel-like marquees and facades of careworn utility, at the center of community life."
This well-written article touches on a number of themes present in the work we've been presenting on this site. It's also helpful in that it links to Meadowlark Arts Council,  a local arts organization that preserved The Dakota theater in Crosby, North Dakota. Tim Kennedy, a landscape architecture scholar, describes these movie theaters as embodying the notion of  “buildings as social capital." As rural communities look towards the future, it's an idea worth considering, worth arguing for among the other conventional ways of engendering economic growth. Here it is, in plain view on the floor of The Dakota:

Today, the Dakota is a star with many roles. It is a destination for high school students on a Saturday night. It is where county employees and local farmers discuss noxious weeds, and where the crowd pours in after football games to watch highlights on the big screen. On Oscar night, the program is shown live. Everyone in town gussies up and walks a red carpet donated by a local furniture company.

"Old Movie Houses Find An Audience In The Plains" can be read in its entirety here.